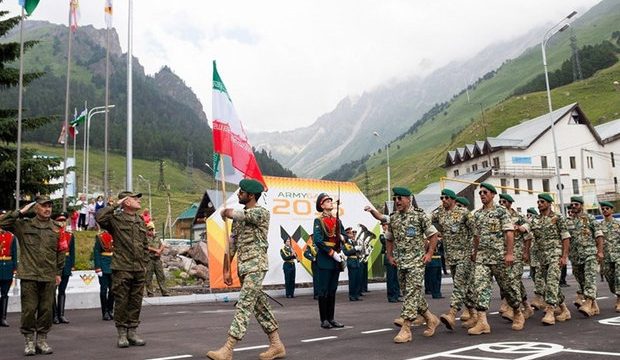 MNA – Al-Mahdi Airborne Brigade of Special Forces who represented Iran in the International Army Games 2017 won the 4th place at the end of the competitions.

The International Army Games 2017, which will end on August 12, comprises 28 events held in Russia, China, Azerbaijan, Belarus and Kazakhstan and in the Chinese portion of the event held in Guangshui, Hubei province, Al-Mahdi Airborne Brigade of Special Forces, from the Armed Forces of the Islamic Republic of Iran, won the 4th place.

In the field of Suvorov attack each team used its infantry fighting vehicles to cross obstacles that engaged firing targets and finishing three rounds of individual and relay races.

In the field of Clear Sky the competition focused on man-portable air-defense system (MANPAD). Each team used their MANPADS to fire at flying targets.

In the field of Safe Environment which was a competition on nuclear, biological, and chemical reconnaissance, each team searched for radioactive sources and conducted decontamination.

China, Russia, Belarus, Egypt, and Iran were the participants in the field.

Gunsmith Master was the field of competition in the maintenance section. Each team competed in the area of dismantling and repairing multiple guns. China, Russia, Kazakhstan, Uzbekistan, and Iran were the participants in the field.

While these four fields were competed in Korla, Xinjiang Uygur Autonomous Region, the Airborne Platoon was held in Guangsui.