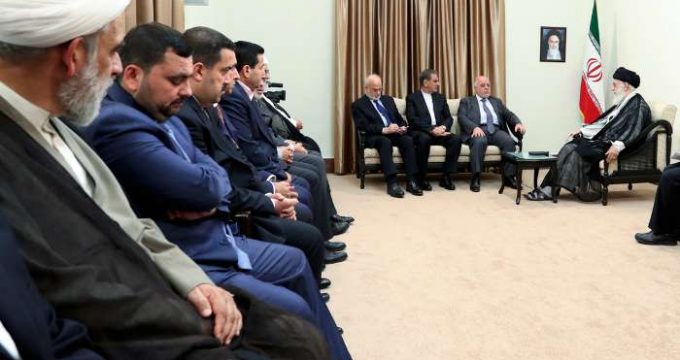 American Herald Tribune | Ali Salaam: The New York Times, owned by the Zionist Jewish supremacist Ochs-Sulzberger family, has no problem with Iraqi suffering as long as Iran is not the one behind it.

The Iraq War was a genocide of the Iraqi people by Zionist supremacists in the Bush administration. Over 1 million innocent people were killed based on a lie. American soldiers died in an Israeli war and now an average of 22 soldiers commit suicide every day because their consciences cannot cope with the fact they committed crimes in an illegal war that served no purpose other than to benefit Israel, not America.

Benjamin Netanyahu, Prime Minister of the Zionist regime, once said “We are benefiting from one thing, and that is the attack on the Twin Towers and Pentagon, and the American struggle in Iraq.”

Depleted uranium chemical weapons used by America have been causing massive birth defects. Corporate colonialism of Iraq has decimated its once vibrant agriculture industry. The vacuum of power left by the ousting of Saddam Hussein enabled al-Qaeda in Iraq to form into ISI. ISI would later merge with the various factions of the Free Syrian Army and the Al-Nusra Front (al-Qaeda in Syria), both backed by the U.S./Israel/Saudi Arabia/Qatar/Turkey, to become ISIS. The U.S. airdropped weapons to ISIS, which was no accident. These weapons were anti-aircraft missiles. Does ISIS have aircrafts? No, but the Iraqi Army does.

With occupation comes resistance. If a robber breaks into your home, you have a right to shoot that robber. The U.S. broke into Iraq’s home quite violently, and thus it is a universally accepted right and natural cause-effect consequence for the homeowners to shoot back. If you are an American soldier reading this, don’t get mad at me or Iraqis. Instead, get mad at the traitors in the U.S. government, the dual-citizen Israeli-Americans in the Bush administration who sent you to this fruitless genocidal war of aggression to have you fight on behalf of Israel, not America. The Iranian-backed Iraqis that resisted America’s invasion into their homeland were deemed “terrorists,” all the while the U.S. helped to create ethnic and sectarian division in Iraq.

So, who do the intrepid reporters at the New York Times vilify for the destruction of Iraq? Iran.

That’s right. Iran. The New York Times wrote a shameful propaganda piece on behalf of the Zionist regime and the U.S. war machine on post-Mosul Iraq.

Who didn’t kill a million innocent people in a war of aggression based on a lie, who only helped local Iraqis exercise their human right of resistance and self-defense, is somehow the one who is “dominating” Iraq. Not the war criminal puppets presidents George Bush and Barack Obama, along with the Zionist deep state that controls them.

Americas forces are the ones who have been committing war crimes in Iraq in the fight against ISIS. The CIA & Mossad created ISIS after all through its funding of rebels in Syria, who would merge with Iraq’s ISI. So of course they would kill mostly civilians instead of their intended target, whereas the Popular Mobilization Units, Kataib Hezbollah, and other grassroots Iraqi militias, made up of Muslims (Sunni & Shi’a) and Christians alike, sent ISIS to hell where they belong with very little civilian casualties. It can’t be said that they have a 100% spotless record, it is war after all and human beings are prone to mistakes, but the PMU and Iraqi Hezbollah are extremely popular among the Iraqi people of all religious sects and ethnic makeups, whereas polls have been conductedshowing how many Iraqis believe America and Israel created ISIS.

Amnesty International served officially as a front for the Israeli foreign ministry in the 1970s, and the way their “humanitarian” propaganda has benefited the expansionist agenda of the Zionist entity shows that they still serve the cause of world Zionism on an unofficial basis, fooling the world by tugging at their heart strings with crocodile tears about human rights. Similarly, Human Rights Watch is funded by Zionist Jewish supremacist billionaire George Soros. They have it in for the Axis of Resistance, which is non-sectarian, albeit mostly Shi’a led. They issue dubious reports about the conduct of Hezbollah, Iran, and various grassroots Iraqi resistance groups to slander them, but not only did Sunnis fight alongside Shi’as and Christians among the Iranian-backed resistance groups, but they welcomed the defeat of ISIS and thanked the PMU for standing for an independent, united Iraq, free of terrorism and imperialism.

Iran has the right to export its revolutionary ideals to Iraq to help free it of U.S. occupation and the scourge of Wahabbi terrorism financed by Gulf monarchies, Israel, the U.S., and Europe.

That is not dominance, that is liberation.

They don’t intend to impose an Islamic government based on the Shi’a school of thought, that works in Iran because the majority population are Shi’a Muslims and they respect the religious minorities. What they do intend is to spread an ideology of independence, self-determination, dignity, resistance, and the end to American-Israeli-Saudi hegemony in the region.

Additionally, Iran not only has supported the resistance in Iraq, they have also supported Iraq economically. Is exporting yogurt to Iraqis who live in the pit of abject poverty “dominance”? I’ve been to Iraq during the Arbaeen processions in 2015. I had so many little kids beg from me for charity. I gave as much as I could. While America and Israel sadistically intend to destroy Iraq, it is not a crime for Iran to help people who are suffering so badly from economic destruction. The New York Times admits in the first sentence of their shameful Zionist propaganda piece: “Walk into almost any market inIraq and the shelves are filled with goods from Iran — milk, yogurt, chicken.”

The New York Times doesn’t seem to have a problem with American war crimes and do not view that as dominance. But threaten the genocidal Zionist entity’s power structure, and the NYT will view that as “dominance.”

These are not journalists. If and when the Zionist regime and the traitors within the American government are held accountable for war crimes in Iraq, and crimes against humanity around the world for that matter, these presstitutes who call themselves “journalists” should also stand trial for their complicity in promoting and whitewashing the murdering of innocent babies, women, children, non-combatant men, and resistance fighters acting within their legal and moral right to defend their homeland.