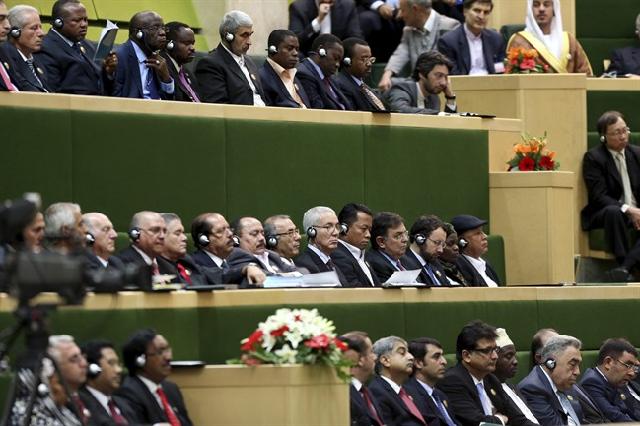 Financial Tribune- The swearing-in ceremony for the reelected President Hassan Rouhani, which is due this Saturday, is to be a more high-profile event than his first, as the level of foreign dignitaries taking part is said to be “unprecedented”.

Rouhani will be sworn in for another four years as the chief executive in the parliament in downtown Tehran.

He will receive his endorsement decree from the Leader of Islamic Revolution Ayatollah Seyyed Ali Khamenei in a separate ceremony on Thursday.

The president’s Deputy Chief of Staff for Communications and Information Parviz Esmaeili said on Tuesday high-powered delegations from at least 92 countries and organizations are confirmed to attend.

“Present in the event will be 25 delegations from Asia Pacific, 26 from Arab countries and 30 from Europe and Americas,” he told IRNA, in addition to 11 delegations from major international entities.

“The number and level of delegations attending such an event is unprecedented,” he said.

Among the guests, he said, are eight presidents and 19 parliament speakers, besides dozens of senior government officials and diplomats.

Esmaeili did not elaborate on the states to be represented, but media reports have so far confirmed that Afghanistan, Pakistan, Armenia, Iraq, Oman, Qatar, Palestine, North Korea, Moldavia and Belarus will attend the ceremony.

Officials from four of five permanent members of the UN Security Council, namely Russia, China, the UK and France, plus Germany, are also to attend.

The five, along with the US, negotiated the July 2015 nuclear deal with Iran that went into effect in January 2016 to settle its lingering dispute with western powers over its nuclear activities.

EU’s top diplomat, Federica Mogherini, who headed the other side of the Iran deal during two years of talks, is also expected to arrive.

Lawmaker Alireza Rahimi said on Monday the high-level participation in Rouhani’s inauguration conveys an “important message” to the world, at a time when Washington seems to be bent on tightening the screws on Tehran.

In a post on his Telegram channel, Rahimi said the planned presence of Mogherini at the event showed the bloc’s resolve to strengthen its ties with Iran and to protect the 2015 deal from the controversial US President Donald Trump who is determined to walk out of the pact to appease his allies Israel and Saudi Arabia.

Hardening the US tone on Iran, Trump has repeatedly hammered the deal and is currently seeking ways to pull out of it.

However, so far, his calls for dismantling the deal or renegotiating the accord have fallen on deaf ears of other signatories to the deal, which are determined to uphold the pact.

Rouhani won the presidential vote in May on a platform of broadening Iran’s international engagement and reforming the economy, making pledges to improve the livelihood of ordinary Iranians and curb unemployment by attracting foreign investment and technology.

Over 23 million people, from a total of 41 million voters, cast ballots for him to win an emphatic 57% of votes to defeat his main rival, principlist Ebrahim Raeisi.

The Interior Ministry has made strict security arrangements for the event, a top official said, adding that the level of security at the parliament compounds has been raised for the inauguration day.

Deputy Interior Minister for Security Affairs Hossein Zolfaqari told Tasnim News Agency on Monday the Islamic Revolution Guards Corps is in charge of security of the ceremony, and the Intelligence Ministry, police and air defense force have also been assigned tasks to support it.

The inauguration day has been declared a holiday in the capital.

“All state and public institutions and organizations, except those extending emergency services, will be closed on Saturday to facilitate the movement of dignitaries and ensure the convenience of Tehrani citizens,” Cabinet Secretary Mohsen Haji-Mirzaei told IRNA on Monday.

Security in Iran’s biggest city is heightened since the self-styled Islamic State terrorist group attacked the parliament and Imam Khomeini Mausoleum early June, the first major terrorist operation in decades, which prompted Iran’s first missile strike outside its borders after the Iran-Iraq war (1980-88) against IS positions in eastern Syria.

Rouhani is preparing to propose his nominees for 18 ministerial posts to the parliament for a vote of confidence on the inauguration day.

The president has vowed to pick a “young” and “inclusive” Cabinet, reportedly saying that more than 50% of the incumbent ministers will be replaced. He is also expected to induct women ministers.

After Rouhani announces his list of ministers, the lawmakers have a week to examine their credentials.

Afterwards, the aspirants will appear before the parliament to outline their plans of action for securing confirmation votes.