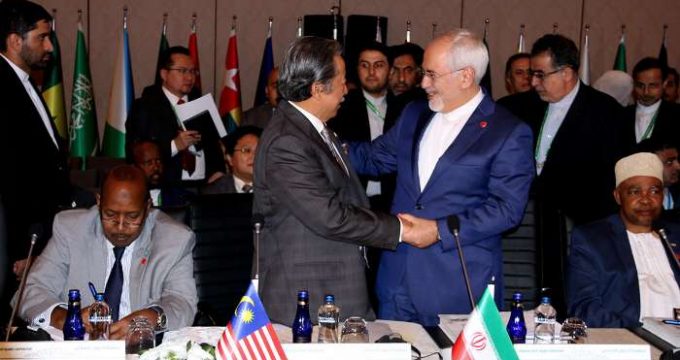 Tasnim – Iranian Foreign Minister Mohammad Javad Zarif slammed the recent cases of Zionist aggression and provocation in the city of al-Quds (Jerusalem) and called for a united Muslim campaign against the Tel Aviv regime’s expansionist policies.

“We should not allow any agenda or cause to compromise the main goal of this Organization to enhance the unity of the Ummah against Zionist expansionism and in support of the establishment of a viable independent Palestinian State with Al-Quds Al-Sharif as its capital,” the Iranian top diplomat said on Tuesday in an address to an extraordinary meeting of the Organization of Islamic Cooperation’s (OIC) Executive Committee.

The recent developments in Quds and al-Aqsa Mosque are dicussed in the meeting in Istanbul, Turkey.

Following is the full text of Zarif’s speech at the meeting.

Allow me to begin by expressing my appreciation to the people and government of the Republic of Turkey for hosting this important meeting to address the deteriorating situation in al-Quds al-Sharif. The situation is inflamed yet again as the occupying forces, in absolute contempt for international law, continue their expansionist agenda against the people of Palestine and Muslim holy sites, especially al-Haram al-Sharif. We strongly condemn this latest episode of Zionist aggression and provocation, which aims to alter the historic status in the Compound, change the demography and assert control over the Islamic holy sites in the heart of Occupied al-Quds al-Sharif. It is but another tragic consequence of the illegal occupation of the Palestinian territory, and the persistent violation of the most fundamental inalienable rights of the Palestinian people.

The city continues to suffocate because of a prolonged siege characterized by checkpoints, occupying forces, illegal settlements, armed and violent settlers, and humiliation, discrimination and oppression of its Palestinian inhabitants. The recent closure of al-Aqsa Mosque, the banning of Friday prayers, and restrictions on Palestinian access to holy sites have further infuriated Palestinians, whose efforts at peaceful protest solely to demand restoration of their rights and preservation of the identity of their city were met with ruthless violence.

We should not also forget the 2 million Palestinians in Gaza, who remain under illegal blockade, in an act of collective punishment, and are deprived from basic necessities even vital medicine, clean water and energy. This deliberate humanitarian nightmare requires urgent remedy through ending the blockade immediately.

The Israeli regime has continued to ignore all appeals of the outside world to cease and reverse its racist policies and practices against the Palestinian people. We in the Islamic Ummah should, first and foremost, close our ranks in a unified global campaign to thwart the Zionist attempts to conceal their criminal policies and practices. We should all resist any attempt to divert our collective attention from the main goal that brought us together in the OIC. We should not allow any agenda or cause to compromise the main goal of this Organization to enhance the unity of the Ummah against Zionist expansionism and in support of the establishment of a viable independent Palestinian State with Al-Quds Al-Sharif as its capital. We should not allow the Zionist to set our agenda or manufacture new causes to ensure their impunity for the crimes they have perpetrated against all of us. We should not be misled by their empty gestures and the illusive mirage of their promises.

We need to engage with one voice with the international community, particularly the Security Council, to put an end to the culture of impunity for the Israeli regime and compel it to cease and reverse its criminal policies and practices.