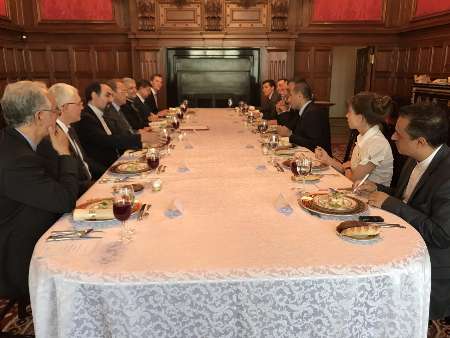 IRNA — Senior Iranian negotiator in Syrian peace talks held in Astana and his Russian counterpart discussed the latest developments in Syria and the region on Tuesday.

The talks were part of a new round of Iran-Russia Joint Political Committee meetings.

Efforts and initiatives by Iran, Russia and Turkey in Syrian-Syrian talks which is held in Kazakhstan’s capital, Astana, have so far led to establishing comprehensive ceasefire and de-escalation zones in Syria. Latest developments with these regards will be discussed by Iranian and Russian officials.

The visiting Iranian official will also hold meetings with Russian Deputy Defense Minister Alexander Fomin and some other officials of the Russian research centers and Syria’s political officials.

Iran, Russia and Turkey in the fourth round of Astana talks on May 5 signed a memorandum of understanding (MoU) for establishing de-escalation zones in some parts of Syria’s Idlib, Homs, Eastern Ghouta, Dara’a, and Quneitra, aimed at easing conflicts.

The next round of Astana talks is scheduled for late August.