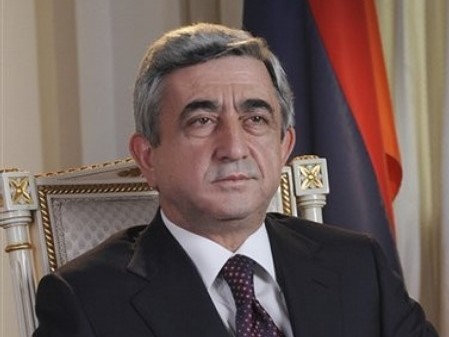 Press TV- The friendship among Armenia, Iran, and Russia serves the fight against extremism in the region, says the Armenian president.

President Serzh Sargsyan made the remark in an interview with IRNA in the Armenian capital of Yerevan, which the Iranian news agency published on Tuesday.

Armenia, Iran, and Russia, he said, were friendly with one another both on bilateral and trilateral levels, he said, adding that the pacifist policy of the three countries contributed significantly to peace and stability in the region.

“Given the current circumstances in the region, it is of importance that Armenia and Iran and Russia — which is Armenia’s strategic ally — combine their efforts to reinforce regional peace and security and form a strong barrier… [to] extremism,” Sargsyan said.

The Armenian president was asked about attempts to spread Islamophobia by certain countries in the region and the world.

“Islamophobia is unacceptable, as is whatever phenomenon in which a feeling of hatred toward others is concealed,” he said.

Any such attitude deepens rifts among people who follow different faiths and who have different cultures and ideologies and can have “catastrophic and irreversible consequences,” Sargsyan said.

As a case in point, he cited the 1915 mass killing of Armenians by the-then Ottoman forces, and regretted that some parties continued to exercise a policy of “Armenophobia,” which he said had turned into a main obstacle in the way of the resolution of the Nagorno-Karabakh dispute.

The Armenian president said relations between Armenia and Iran served as a model of good-neighborly ties and lauded the peaceful co-existence of Armenians and Muslims in Iran.

The Armenian head of state, who is to travel to Tehran to attend President Hassan Rouhani’s inauguration ceremony for a second term on Saturday, also thanked Iran for its principled policy on the disputed region.

“The Islamic Republic has always supported a peaceful resolution of all conflicts and differences between countries,” he said.

Azerbaijan and Armenia have quarreled over the Nagorno-Karabakh region. A territorial war between the two sides claimed nearly 30,000 lives in the early 1990s.

The two neighbors, however, never signed a peace pact despite several ceasefire deals.