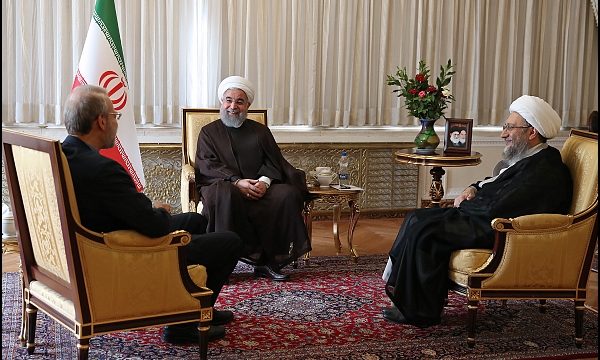 No one can harm Iranian Armed Forces: Rouhani

Press TV – Iranian President Hassan Rouhani says the three branches of the government support the country’s Armed Forces and no one can harm them.

Rouhani made the remarks following a meeting with Iranian Parliament Speaker Ali Larijani and Judiciary Chief Ayatollah Sadeq Amoli Larijani in Tehran on Sunday amid the recent US bids to impose fresh sanctions on the Islamic Republic.

Iran is currently in such a position that no one can harm it, Rouhani said, adding that the three branches of the government and other pillars of the Islamic establishment are united and support the country’s Armed Forces.

The Iranian president further stated that economic issues, particularly national production and investment, were also discussed at the meeting.

Rouhani added that production, creation of job opportunities and economic prosperity were very important for the country at the current juncture.

The heads of the three branches of the government believe that investment must be fully backed in the country, he said, adding that Iranian authorities sought to set up support packages for foreign and domestic investors.

If Iran manages to boost close economic cooperation with world countries, US officials would not be able to use sanctions as a weapon, the Iranian chief executive pointed out.

Both the US House of Representatives and Senate overwhelmingly voted earlier this week to impose new sanctions on Iran over its ballistic missile program, with President Donald Trump set to sign the bill into legislation.

The Iranian Parliament’s Committee on National Security and Foreign Policy on Saturday passed the general outlines of a motion to counter the terrorist and adventurous US measures in the region.

Iranian Deputy Foreign Minister for Legal and International Affairs Abbas Araqchi, who was also present in the extraordinary session of the committee, stressed the importance of adopting an appropriate measure in response to the “hostile and malicious” US moves given their adverse effect on the implementation of the landmark nuclear agreement, known as the Joint Comprehensive Plan of Action (JCPOA), which was signed between Iran and the P5+1 group of countries in July 2015.