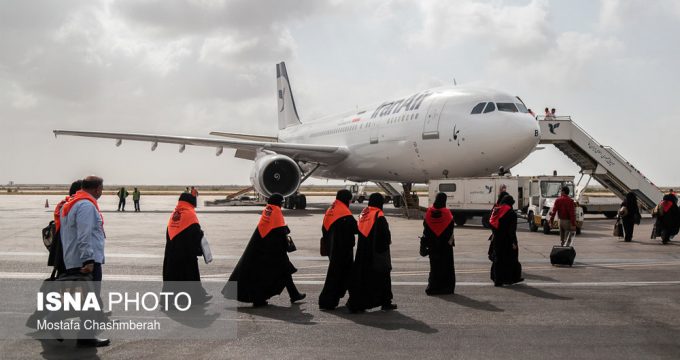 Press TV- Iran flies a first group of its pilgrims for Hajj in Saudi Arabia since the kingdom ruptured diplomatic ties with the Islamic Republic and withheld cooperation towards enabling Iranians to partake in the rituals.

The Iranians departed from the southern port city of Bandar Abbas for the holy city of Medina early Sunday, said Seyyed Ali Qazi-Askar, the representative of Leader of the Islamic Revolution Ayatollah Seyyed Ali Khamenei for Hajj and pilgrimage affairs.

Two more groups were to depart for Saudi Arabia later in the day.

Riyadh cut its ties with Tehran in early 2016 after violent protests in front of its Iran-based diplomatic missions against the kingdom’s earlier execution of leading Saudi Shia cleric Sheikh Nimr al-Nimr. It then prevented Iranians from joining the religiously-momentous rituals that year by refusing to set up an ad hoc mechanism enabling their travel to the kingdom.

A year earlier, a deadly human crush had occurred during Hajj rituals in Mina, near the Saudi holy city of Mecca, killing thousands of pilgrims, including hundreds of Iranians. The incident had also cast doubt on the kingdom’s efficiency in hosting the rituals.

In January, however, Iran said it had been sent an invite by Saudi Arabia announcing the latter’s willingness to host Iranian pilgrims.

Earlier in July, Iran’s Culture Minister Reza Salehi Amiri said Riyadh had provided “written assurances” that it would meet all of Tehran’s conditions with regard to ensuring security for Iranian pilgrims in the upcoming Hajj ceremony.

The Iranians going on the pilgrimage this year number 80,596. They will be accompanied by less than 6,000 staffers tasked with providing medical, administrative, rescue, and other services.