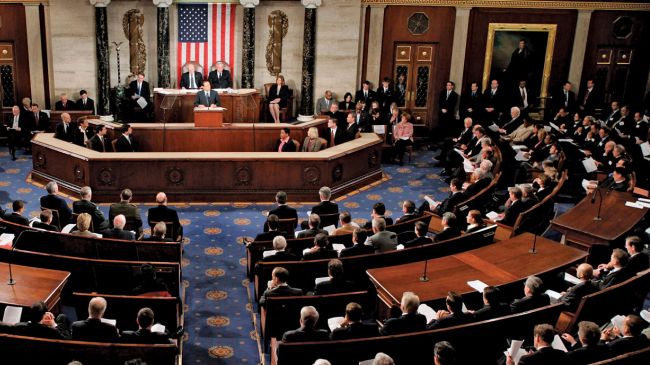 Press TV – The Republican-controlled US House of Representatives votes overwhelmingly to impose new sanctions against Iran, Russia and North Korea.

The lower chamber of the US Congress made the move Tuesday despite opposition from US President Donald Trump.

House Speaker Paul Ryan claimed that the move is essential to tighten “the screws on our most dangerous adversaries in order to keep Americans safe.”

After being passed 419 to three in the House, the sanctions package will be sent to the Senate, where the Republican senators remain in favor of it.

The lawmakers have also curbed the Russia-friendly president’s authority to waive the penalties without first securing permission from the Congress.

Top officials at the Trump administration, including Secretary of State Rex Tillerson, have already voiced opposition to the move, arguing it would tie the president’s hands in dealing with Russia.

Russia is being blamed for allegations of interfering in the US 2016 presidential election, which yielded President Trump, as well as its measures in Ukraine and Syria.

“Under Vladimir Putin, Russia has invaded its neighbor Ukraine, seizing its territory and destabilizing its government,” House Foreign Affairs Committee chairman Ed Royce claimed in applauding passage. “Left unchecked, Russia is sure to continue its aggression.”

Iranian lawmakers, meanwhile, are closely monitoring all moves by the United States, particularly the new sanctions against the Islamic Republic and Russia, and will make swift decisions accordingly, said Parliament Speaker Ali Larijani earlier in the day.

The new bill could be sent to the US president before lawmakers leave for their August recess.

According to a spokesman for John Cornyn, the number 2 Republican in the Senate, there has been no decision on when the Senate might begin considering the House bill.

The measure was made amid an ongoing investigation into alleged collusion between Trump’s inner circle and Russia during the 2016 presidential campaign and transition.

The US intelligence community has concluded that Moscow helped with the New York billionaire’s campaign effort ahead of winning the White House, an allegation dismissed by Moscow.

White House press secretary Sarah Huckabee Sanders maintained late on Monday that Trump was still considering whether to back the move.

#IranDeal, JCPOA, U.S. House of Representatives, US sanctions against Iran July 26, 2017
Hezbollah vs terrorism battle shines in trilogy of Army, People and Resistance
Regional crises have no military solution:Deputy FM