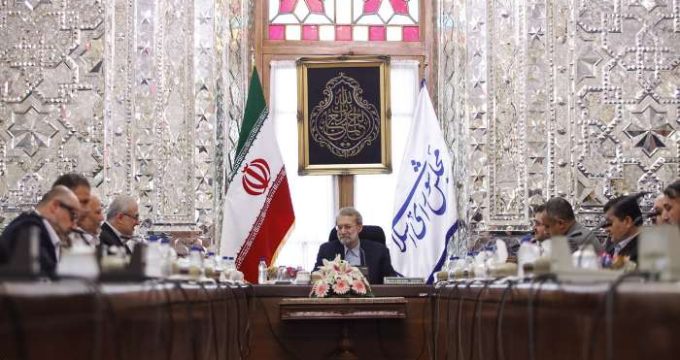 Fresh US anti-Iran sanctions sign of grudge against Resistance Axis

MNA – Iranian Foreign Ministry Spokesman Ali Larijani said if we look at the text of the recent US sanctions against Iran and Russia, it is quite clear that they were approved due to US hate against Resistance Axis.

“The success of the Resistance forces in suppressing the terrorists is a valuable move, and certainly will remain in history, although in the current situation, some adventurous countries are seeking to confront the Resistance forces,” Larijani said in a meeting with the Head of Lebanon’s Loyalty to the Resistance Bloc Mohammad Raad and other lawmakers of the group.

Indeed, the conditions for the Axis of Resistance, especially Lebanon’s Hezbollah, are now different from the past, and today the position of Resistance in the regional arena is quite clear, he added.

Pointing to the actions and policies of some of regional countries, Larijani said, “today, we are entangled in the political arrogance of the region, which will definitely be a big problem for the region, but fortunately the endurance of Axis of Resistance has promoted its position and today, we are witnessing the successive defeats of the terrorists in Iraq and Syria.”

He underlined that along with increasing victories of the Resistance, hostilities and hatred will intensify against this Axis; today we see that these behaviors and actions are more due to grudge against the axis of resistance, so some countries in the region with the support of US raise the issue of sanctions imposed on Hezbollah, which, of course, will make them loose more face than ever.

He also reiterated that the Islamic Republic has no doubt in supporting the resistance and suppression of the terrorists, saying “this is definitely an Islamic and humane duty because the terrorists hurt the dignity of Muslims.”

Mohammad Raad, for his part, pointing to the victories of Lebanon in the fight against terrorist groups, said enemies and terrorists were in a united front at the beginning of the Syrian and regional crisis, but with the endurance of Axis of Resistance, they faced a rift and disagreement in many conflicts at the regional and international levels.

Pointing to the conflicts of some countries with Lebanon’s Axis of Resistance, he said, “the clashes took place at a time when national consensus was taking place in Lebanon, and enemies were seeking to bypass our achievements.”

Raad noted the Axis of Resistance is getting stronger and will definitely stand against the challenges.