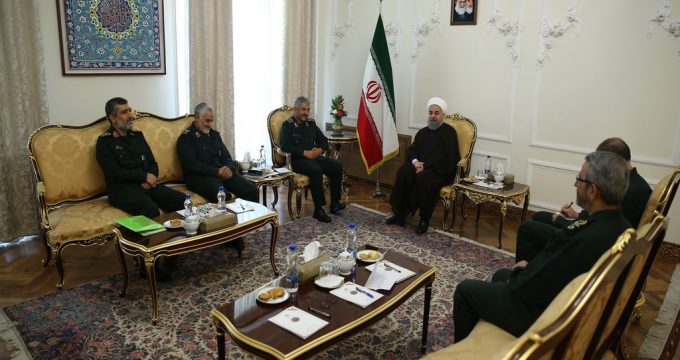 president.ir- President Rouhani met with senior commanders of Islamic Revolutionary Guards Corps (IRGC) and stressed that unity among all forces and institutions is essential for the realisation of the Supreme Leader’s guidelines and serving the people.

Speaking in the meeting that was held on Monday, Dr Rouhani also appreciated IRGC’s efforts and services, expressing hope that during the 12th Administration’s term of office, coordinated efforts by all armed forces contribute to meeting people’s demands more quickly.

He also expressed hope that all institutions and responsible organs increase their efficiency with more clarity in their specialised fields and guaranteeing national security of the country by increasing IRGC and the Army’s combatting power by taking advantage of the modern technology.

The President also stressed that the 12th Administration will support IRGC’s services and efforts.

At the same meeting, Major General Mohammad Ali Jafari, the Commander of Islamic Revolutionary Guard Corps also said: “IRGC is ready for comprehensive cooperation with the administration in realisation of the goals of the revolution”.

Congratulating Dr Rouhani’s re-election and people’s high turnout in the election, he appreciated the administration for supporting the defensive power of the country as well as combatting terrorism.