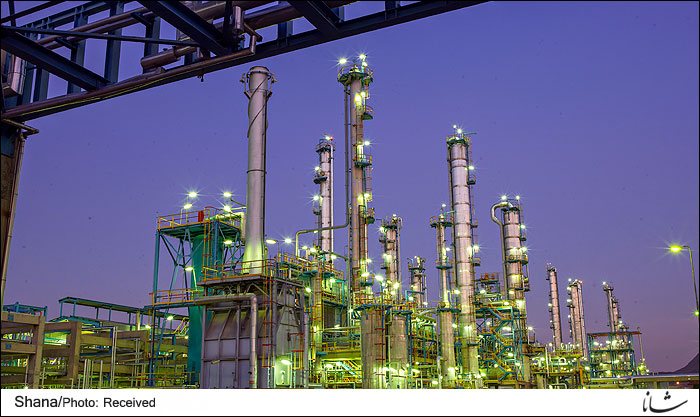 Under the next administration of President Hassan Rouhani, Iranian petrochemical officials intend to produce more feedstock at the giant South Pars gas field as more petrochemical plants are to be built. The new plants are projected to be constructed in new petrochemical hubs.

Future development of petrochemical industry will not be limited to Bandar Imam and Assaluyeh as four other hubs off Persian Gulf and the Sea of Oman would also see new projects.

Parsian Special Economic Zone in eastern Assaluyeh, Jask Free Zone located next to the Strait of Hormuz, Chabahar Free Zone and nearby Iranshahr Free Zone are the four hubs.

In addition to these four hubs, four mega-tone methanol and urea/ammoniac projects with capacities above one million tonnes in Lavan and a number of GTP plants in the mainland are envisaged. Since natural gas will be available in abundance in the near future, the NPC intends to apply GTO and GTP technologies to produce olefin which is crucial to downstream industrial development.

Senior NPC managers say investments in the Persian Gulf and the Sea of Oman will continue. All Persian Gulf and Sea of Oman coasts have potential to become petrochemical hubs due to access to feedstock and high seas. The private sector is building new hubs in Chabahar, Jask and Parsian. Iran has already laid out a pipeline as far away as the Pakistani border for future transfer of gas. The pipeline has capacity to carry 105 mcm/d of gas. Pakistan would be receiving 25 mcm/d of gas; therefore, the pipeline would be able to supply more than 75 mcm/d of gas to petrochemical plants in southeastern Iran.

Furthermore, railroads in southeastern Iran and Chabahar Free Zone could be attractive for investors. Required infrastructure is also envisaged to be erected in Jask, Parsian and Lavan.

In the near future, natural gas will become the main feedstock for Iran’s petrochemical plants because ethane would not be easily accessible. Given Iran’s huge gas deposits, it will be one of the most reliable countries for investment in petrochemical projects.

Iran enjoys unique opportunities for petrochemical development thanks to its access to liquid and gas feedstock required for this industry. Iran holds the largest hydrocarbon (oil and gas) reserves in the world. There are also other advantages in Iran like long sea borders in the Persian Gulf and the Sea of Oman that could save foreign investors big sums in shipping products to target markets.

Educated and experienced youth and the skills developed by designing, engineering, construction and installation companies are among other advantages in Iran. Above all, with a population of more than 80 million and easy access to important consumer markets like Central Asia, Iraq, India and China, Iran would be attractive enough for potential investors. Add to this Iran’s free trade and special zones that would allow foreign investors to invest alone and be exempted from taxes and duties for 10 years.

Petrochemical industry consumes huge amounts of water and energy and many petrochemical units are already facing water shortages and decline in exports. Therefore, development of infrastructure in new hubs could be a top priority for petrochemical sector.

Iran aims to become the top petrochemical producer in the region by 2025and is currently exporting petrochemicals to more than 40 countries. Iran’s landmark nuclear deal with six world powers and the ensuing lifting of sanctions have provided suitable conditions for Iran to benefit from 400-million-strong markets in neighboring countries. Given Iran’s geopolitical position, these markets are highly significant. Iran is instrumental in meeting basic needs in other countries. After new development projects become operational by 2020, Iran’s share of petrochemical production in the Middle East region would reach 41%.

Under Iran’s 6th Five-Year Economic Development Plan, 55 million tonnes will be added to production capacity, while 33 petrochemical plants plus eight supply chains for the production of 60 types of products are planned.

Over the past 10 years, the pace of provision of infrastructure for investment in the petrochemical industry has been slowed down by sanctions. The Iranian government has tried its best to make up for losses. Petrochemical industry is key to increasing profitability and boosting Iran’s status in economic ties in the region. The industry must be paid attention to more seriously as there are powerful rivals. In addition to gaining revenues from petrochemical industries, jobs will be created and welfare will be provided to underprivileged areas.

The government’s new approach in developing petrochemical infrastructure is a sign of paying special attention to the infrastructure in this sector and increasing advantages. Given Iran’s special conditions and its standing in energy commodity exchanges, as well as its hydrocarbon reserves and paying more attention to petrochemical industry is an important and strategic decision. By supporting the private sector, the government is paving grounds for the presence of Iranian and foreign investors. Iran’s petrochemical industry has always been coherent enough to attract investment. Such advantages would turn Iran into a big petrochemical hub in the future to bring investors in.

“Undoubtedly, improvement in Iran’s international relations and attraction of more investment will promise a brighter future for the petrochemical industry,” said Peyvandi.

In the current calendar year to March 2018, the completion of four projects which had remained incomplete will add two million tonnes to the country’s petrochemical production capacity.