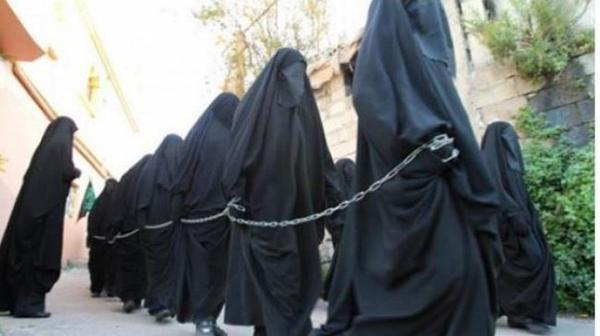 American Herald Tribune – Women who managed to break free from the ISIS terrorists told RT harrowing stories of what they lived through, shedding light on the rampant violence, sex slavery and a bloodcurdling neglect for life thriving in the so-called “caliphate.”

Khadija, who came to Syria from Tunis to live in Syrian stronghold of ISIS in Raqqa for three years, told RT that she saw plenty of cruelty and injustice, but no genuine pursuit of religion or Islamic law.

“My husband and I made a huge mistake by coming there. And I advise you not to believe those who say that ISIS is an Islamic state, which preaches Islam and Sharia and lives pursuant to the teachings of Prophet Muhammed and the Koran,” Khadija said.

The militants do not tolerate any dissent and opposition to their reign, she noted.

“Everybody, who takes a stand against them, they behead. And people don’t know when this is going to happen.”

“They are not on righteous path. This is the state of tyranny and Satan. My husband renounced them, and told me to do the same,” Khadija went on to say, adding that she and her husband escaped Raqqa running south to the town of al-Mayadeen and then to Turkey.

While it appears that for a lot of women the life under ISIS was a living hell, it was not uncommon for the militants to have a sex slave in addition to a wife.

According to Khadija, women who are not sex slaves, are not subjected to the so-called “sex jihad.”

“You go to the city hall and get married. If you have been married and your husband got killed, you just got married to another man,” she said. The completely different story is, however, when a woman is captured and turned into a sex slave.

As a sex slave, a woman is considered to be the property of her owner, to do with as he pleases, for instance, to sell or give as a present.

“The wife and the other woman live separately. He lives with them in turns – one day with one woman, and the other day with another,” Khadija said, noting that despite their superior status lawful wives sometimes envy the Yazidi slave women.

“Many men love Yazidi girls more than their wives,” she said.

A 20-year-old, Nur Al-Khouda, originally from Tripoli, Lebanon, said her husband first joined a Salafi group where he was indoctrinated with IS ideology and left for Syria.

“He persuaded me that there’s nothing bad there and I trusted him as his wife so I arranged all the documents and I joined him in Syria,” the young woman told RT.

The slave trade is a booming market in ISIS, she said.

Young girls also became a mere commodity once they are in hands of jihadists, she added, recounting that the militants planned to sell a 10-year-old girl for some $10,000.

It was reported the girls as young as 8 are sold at such slave markets. Some 3,000 to 5,000 Yazidi women are believed to be held captive by ISIS as sex slaves.