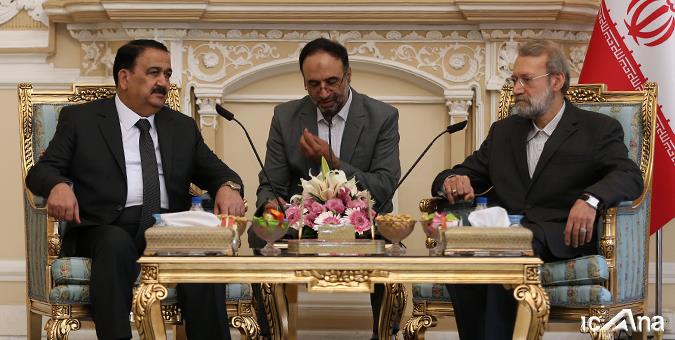 IRNA — Iranian Parliament Speaker Ali Larijani said that the Iraqi government should defend its territorial integrity by preserving political unity to have a more powerful, safe and democratic country in the future.

He made the remarks in a meeting with Iraqi Defense Minister Erfan al-Hiyali.

Hailing Iraq’s achievements in fighting terrorism, Larijani said that despite its heavy costs, fighting Daesh immuned Iraq from recurrence of similar incidents in the future.

Certain states which are not Iraq’s allies saw discord in the country and are proposing partitioning of the war-torn region, he noted.

The speaker added that Israel do not want establishment of peace in the region, noting that protection of security in Iraq is necessary.

Cautioning about penetration of terrorists, he said: ‘Iran would continue its support for the neighboring and friend countries.’

Iran supports unity of all ethnic groups and sects in Iraq and will side with the Iraqi people and government for reconstruction of the country, Larijani added.

He said that all ethnic groups in Iraq should participate in the politics and governance of the country and do not permit the enemies to interfere in their fate.

The speaker pointed to the role of political differences in penetration of Daesh in Iraq and called for promotion of parliamentarian and economic relations between the two states.

Expansion of cooperation and sharing experiences in the fields of fight against terrorism and extremism, border security, training, logistics, technical and military supports were included in the MoU.