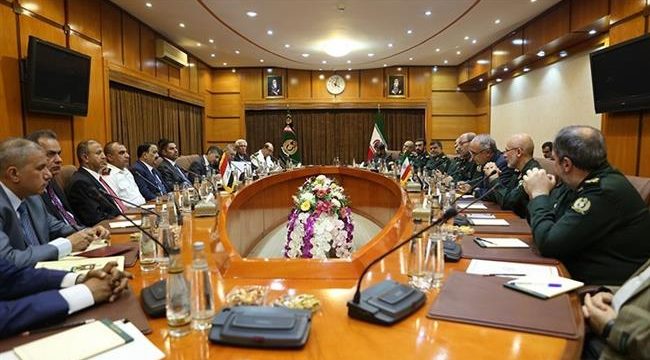 “We have cooperated and will cooperate with the Iraqi government and nation and will continue our support [for the country],” Dehqan said in a meeting with Iraqi Defense Minister Erfan al-Hiyali in Tehran on Saturday.

“We will use our utmost political, economic and military capabilities along with Iraq’s capabilities to establish sustainable security and stability in the country and create a powerful Iraq,” he added.

He further hailed the Iraqi armed forces’ recent achievements in the fight against terrorism and the full liberation of the northern city of Mosul from the grip of the Daesh terrorist group and said such a victory was the outcome of bravery, unity and coherence among Iraqis of all ethnicities and faiths.

He emphasized that national unity and integrity in Iraq would guarantee stability, security and interests of all ethnic groups and said Iran would never accept any divisive move in the country.

On July 10, Iraqi Prime Minister Haider al-Abadi formally declared victory of the country’s forces over Daesh in Mosul, Iraq’s second largest city which fell into the hands of the Takfiri terrorist group in June 2014. The victory marked the formal end of a campaign that lasted nearly nine months.

Pointing to the support of certain regional countries for terrorists and their collusion with the US and Israeli regime to cause insecurity across the region, the Iranian defense minister said, “A regional and international consensus must be achieved against terrorism and its supporters” to eradicate it, Dehqan said.

The Iraqi defense minister, for his part, said Tehran and Baghdad have common views, objectives and interests, which would prepare the ground for the expansion of relations.

Hiyali hailed Iran’s full support for the Iraqi government, nation and the armed forces and called for the further development of defense and military cooperation with the Islamic Republic.

At Baghdad’s request, Iran has been providing military advisory assistance to Iraq in its counter-terrorism campaign. Tehran says it will continue rendering assistance to Baghdad as long as the Iraqi government calls for it.