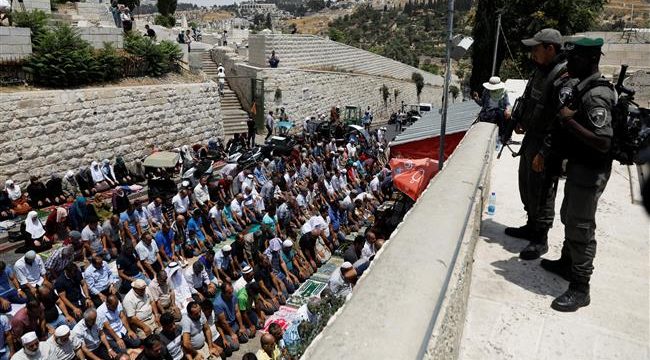 Press TV- Israeli troops clash with Palestinian worshipers who are marking a “Day of Rage” to protest Tel Aviv’s virtual siege of the al-Aqsa Mosque in East Jerusalem Al-Quds.

At least four Palestinians were injured on Friday as Israeli forces fired rubber bullets at worshipers near a church in the Old City of Jerusalem al-Quds.

Hamas leader Ismail Haniyeh condemned the Israeli crackdown and its prevention of Palestinian worshipers from entering the al-Aqsa Mosque for Friday prayers.

Israel is preventing Palestinian men under the age of 50 from entering the compound, including Haram al-Sharif, which is known as Temple Mount to Jews.

“Entry to the Old City and Temple Mount will be limited to men aged 50 and over. Women of all ages will be permitted,” the Israeli police said in a statement.

Israel fully closed off the compound to Muslims after a reported shootout on July 14 near the site that left two Israeli soldiers and three Palestinians dead. The move sparked far-and-wide condemnations across the Muslim world.

It restored access to the compound later, but placed metal detectors at its front, prompting Muslims to refuse to reach the site and hold prayers outside in a show of protest.

Video footage that circulated across the social media showed Israel forces and technical staff setting up the detectors, and Palestinians holding prayers at Bab al-Asbat (Lions’ Gate) to the Old City amid strict security measures.

There had been speculations that Israel’s Prime Minister Benjamin Netanyahu may order the detectors to be removed for Friday prayers, but he reportedly decided not to do so after consultations with cabinet members.

Thursday marked the sixth day of clashes between Muslim worshipers and Israeli forces. Some 50 Palestinians were wounded in the latest skirmishes.

Palestinian al-Aqsa satellite channel, separately, reported that Israeli forces had raided the house of Amjad Abu Asab, the chairman of the al-Quds Committee for Families of Prisoners, in al-Quds and arrested him.

The local body campaigns on behalf of the kinsmen of the thousands-strong Palestinians in Israeli incarceration.