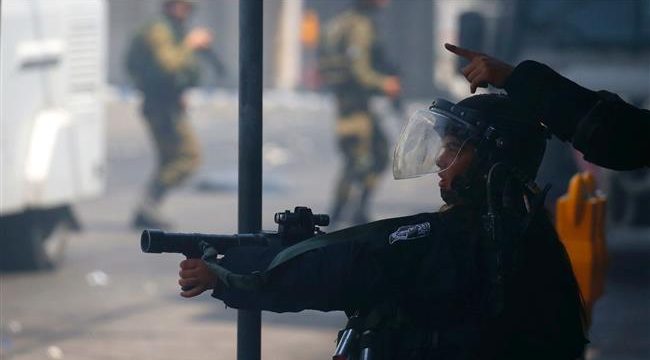 Press TV- At least four people have reportedly lost their lives during clashes in the occupied Palestinian lands as tensions (#Save AlAqsa) remain high there in the wake of the Tel Aviv regime’s crackdown on Palestinian worshipers wishing to pray at the al-Aqsa Mosque compound.

Witnesses said Sharaf was shot in the neck by an Israeli settler, and later succumbed to his wounds.

Palestinian protesters arranged Sharaf’s funeral shortly after his death amid speculations that Israeli authorities might seize his body. Participants in the funeral chanted slogans in memory of the teenager, and in support of al-Aqsa Mosque.

Sharaf’s death came on the same day that a seven-year-old boy, whose identity was not immediately known, died after inhaling poisonous gas used by Israeli forces to suppress a demonstration in al-Ramm town northeast of Jerusalem al-Quds, Lebanon’s al-Mayadeen TV channel reported.

Elsewhere, in the East Jerusalem al-Quds neighborhood of At-Tur, located approximately one kilometers east of the Old City of Jerusalem al-Quds, an Israeli settler shot and killed a young Palestinian man.

The Palestinian was identified by medical sources as 20-year-old Muhammad Abu Ghanam. He was a sophomore at Birzeit University.

Later on Friday afternoon, the Palestinian Ministry of Health said another Palestinian succumbed to his wounds at a hospital in Ramallah after having been shot in the chest by Israeli forces during a demonstration in Abu Dis.

The International Committee of the Red Cross (ICRC) announced that about 380 Palestinians had been treated for injuries sustained during clashes with Israeli forces on Friday.

Earlier on Friday, dozens of citizens were injured after Israeli forces violently attacked Palestinian worshipers, who are marking a “Day of Rage” outside the al-Aqsa Mosque compound in protest at increased Israeli security measures at the holy site, including the installment of metal detectors and cameras, following a deadly shooting attack late last week.

Meanwhile, hundreds of protesters have staged separate demonstrations in Jordan and Turkey to voice their firm support for al-Aqsa Mosque and denounce the latest Israeli regime’s measures against the sacred site.

People from various walks of life as well leader of Jordanian political factions took part in a rally in downtown Amman, carrying signs and holding up mock-ups of al-Aqsa and Dome of Rock mosques.

“This march comes in support of our brothers in Palestine, and in defense of al-Aqsa (mosque compound). We are here representing all the factions of the Jordanian people, from all the governorates, to announce that we are standing with our brothers in Palestine, with their struggles and their victories. We tell the Jordanian leadership that the reactions undertaken by the government have not been enough,” Secretary General of Islamic Action Front, the Jordanian Political Wing of the Muslim Brotherhood, Mohammed Awwad, said in Arabic.

Elsewhere in Turkey, people poured into the streets after Friday prayers to denounce Israel’s restrictions on al-Aqsa Mosque compound. Rallies were held outside mosques across the country, with participants waving Turkish and Palestinian flags, and calling on Israel to remove limitations, which include installation of metal detectors at the entrance to the holy site and the banning of Muslims below the age of 50 from attending prayers there.

He said worship at the al-Aqsa Mosque would be made difficult if each person is searched at entry.

Yildrim described limits imposed on Muslim prayers as wrong, stressing that the such a practice would not contribute to a solution.

On July 14, three Palestinians opened fire on Israeli forces at the al-Aqsa Mosque compound, killing two of them before being shot dead.

At least four people were injured near the Lion’s Gate, which is known as Bab al-Asbat in Arabic, on Friday.

Local sources, requesting anonymity, said nine citizens were injured during clashes in the towns of al-Eizariya, which lies in Area B of the occupied West Bank, as well as Abu Dis.

Israeli forces also cordoned off the road leading to Qalandia refugee camp and fired shots to disperse a crowd of worshipers who had gathered there. At least 15 worshipers sustained gunshot wounds as a result.

About 30 citizens were also struck with rubber bullets during clashes in the central West Bank city of Bethlehem, located about 10 kilometers (6.2 miles) south of Jerusalem al-Quds.

The occupied Palestinian territories have witnessed new tensions ever since Israeli forces introduced restrictions on the entry of Palestinian worshipers into the al-Aqsa Mosque compound in East Jerusalem al-Quds in August 2015.

The al-Aqsa Mosque compound is a flashpoint Islamic site, which is also holy to Jews. The mosque is Islam’s third holiest site after Mecca and Medina in Saudi Arabia.