A Look at Iranian Newspaper Front Pages on July 19

Iran Front Page- IFP has taken a look at the front pages of Iranian newspapers on Wednesday, July 19, and picked headlines from 15 of them. IFP has simply translated the headlines and does not vouch for their accuracy.

Newspapers today widely covered the remarks made by Iranian Foreign Minister Mohammad Javad Zarif about the nuclear deal between Tehran and world powers, and the US anti-Iran measures. He made the comments in several interviews and meetings in New York.

The US administration’s certification of Iran’s compliance with the nuclear deal, and the same time its move to impose fresh sanctions on Iran, was also a top story today.

First Vice-President Es’haq Jahangiri’s criticism of those who try to make a fuss to prevent the government from signing deals with foreign firms also received great coverage.

1- Zarif: Withdrawing from JCPOA, an Option on Iran’s Table

2- Iran Has Complied with Its Commitments: US Secretary of State 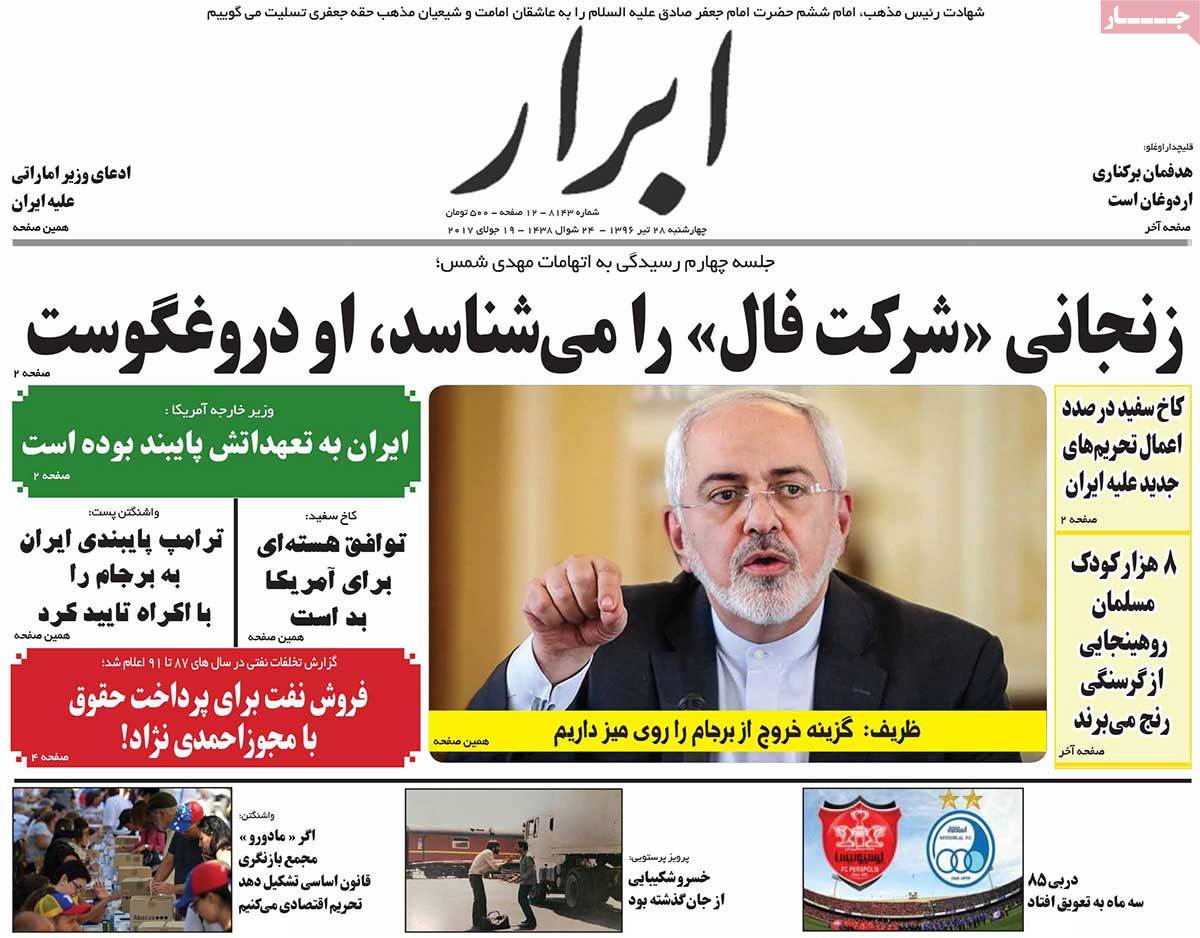 2- Rouhani Is Smart, He Won’t Deviate from Path of Stability: Spokesman

3- Zarif Is Concerned: Iranian FM’s Different Tone in US 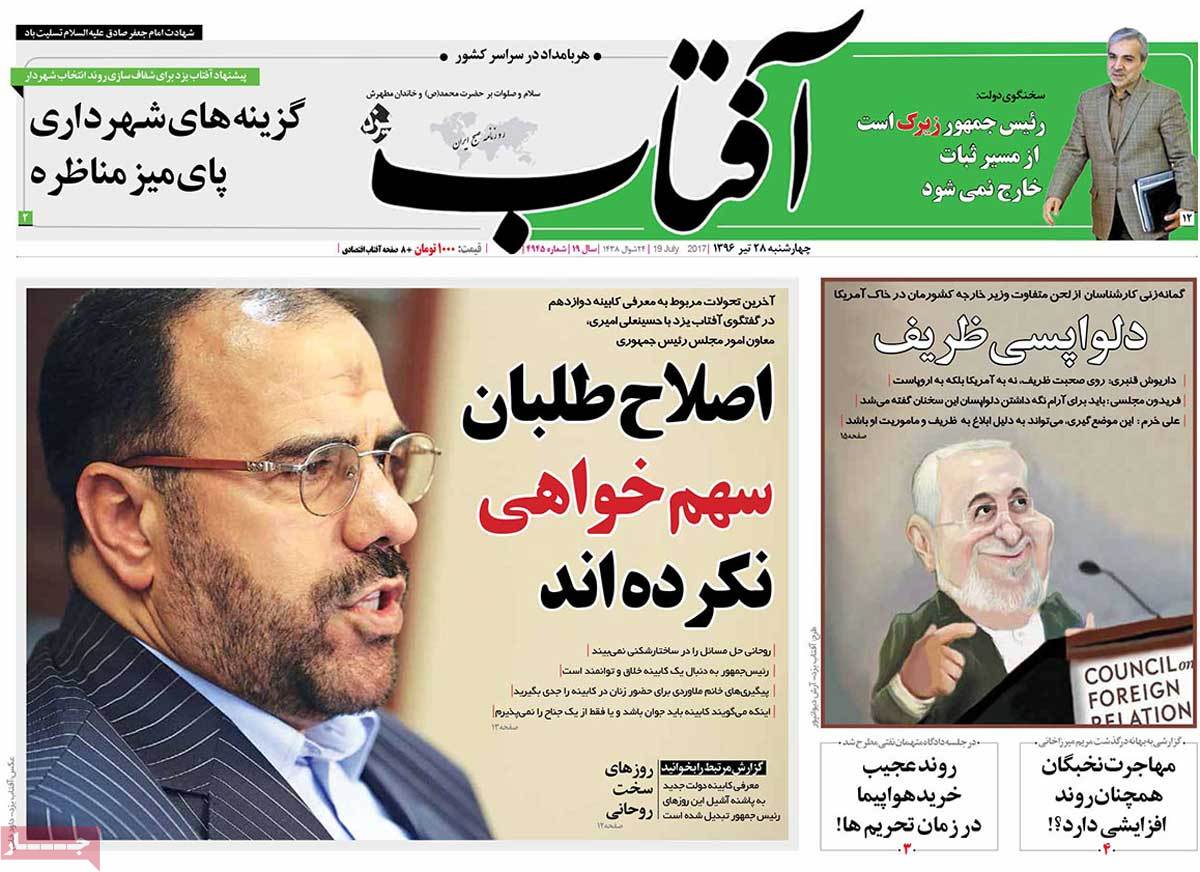 1- Zarif: We Have Option of Withdrawing from JCPOA

2- Populism May Come Back If Economic Priorities Ignored: Analyst 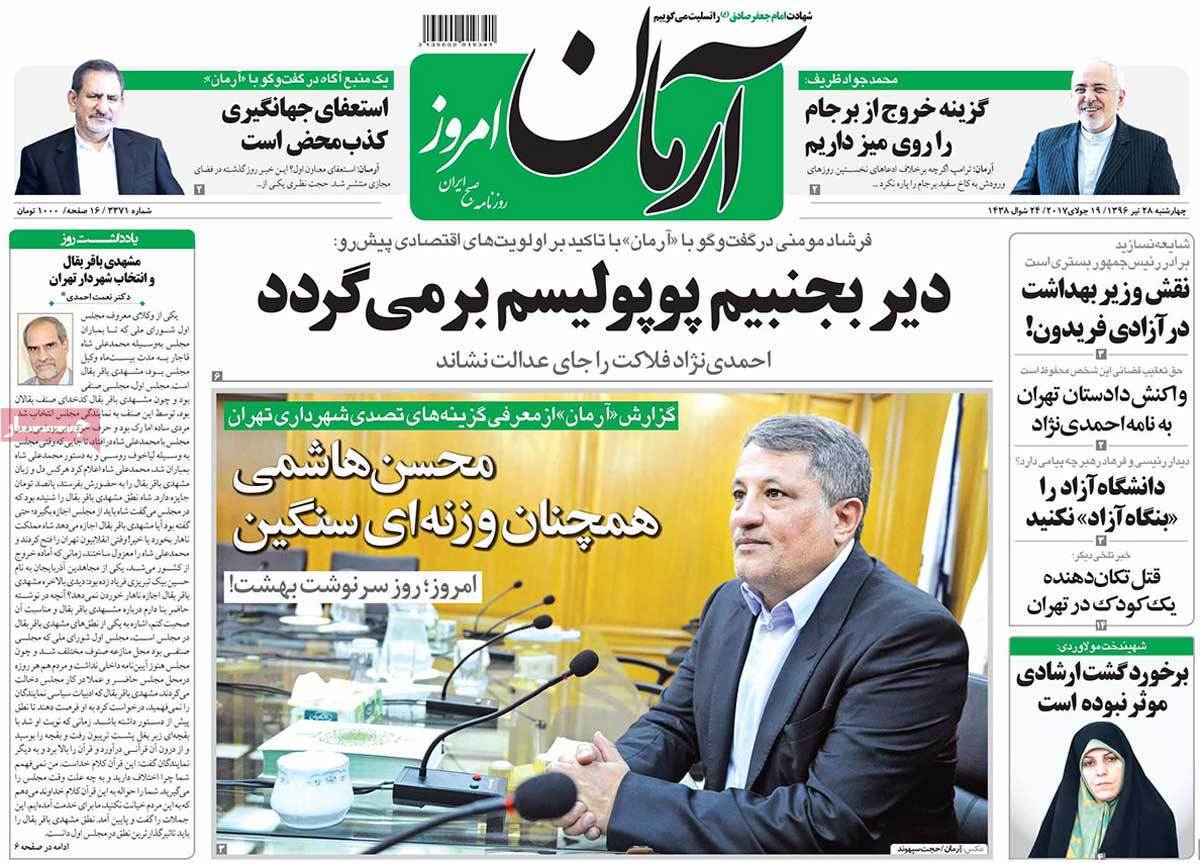 2- Oil Minister: We’re Being Attacked Today Because Our Economy Is Politicized 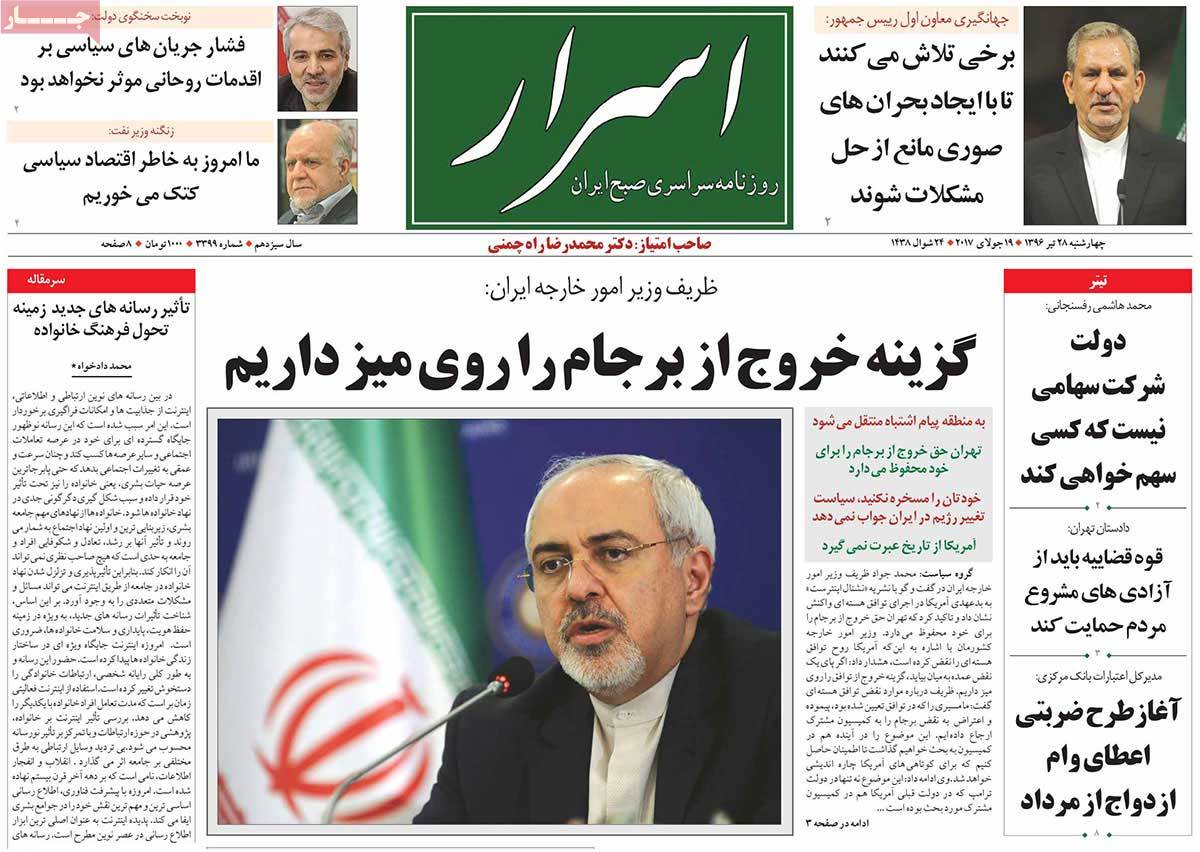 1- Mental Disorders in Women 6% More than Men: Over 12m Suffering

2- VP for Women Affairs: Morality Police Not Effective on Hijab 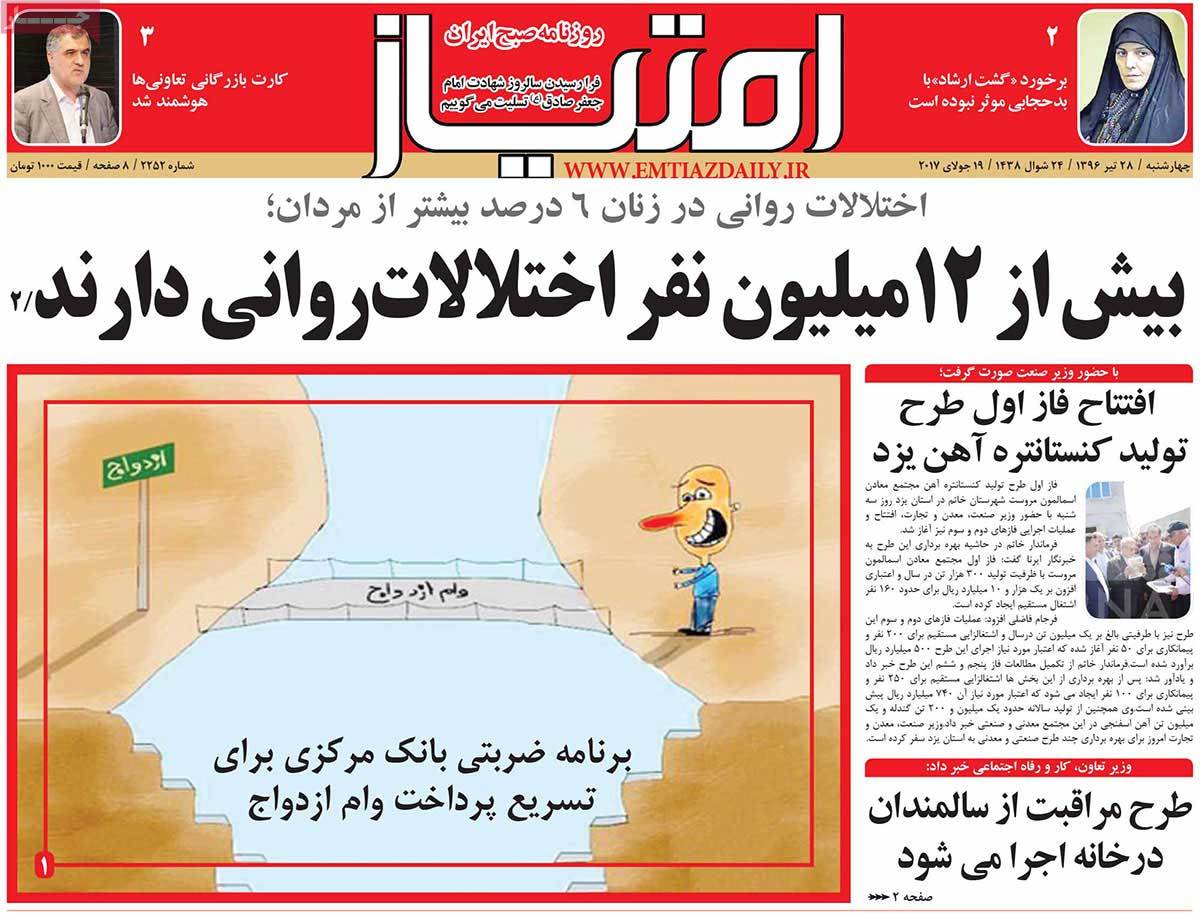 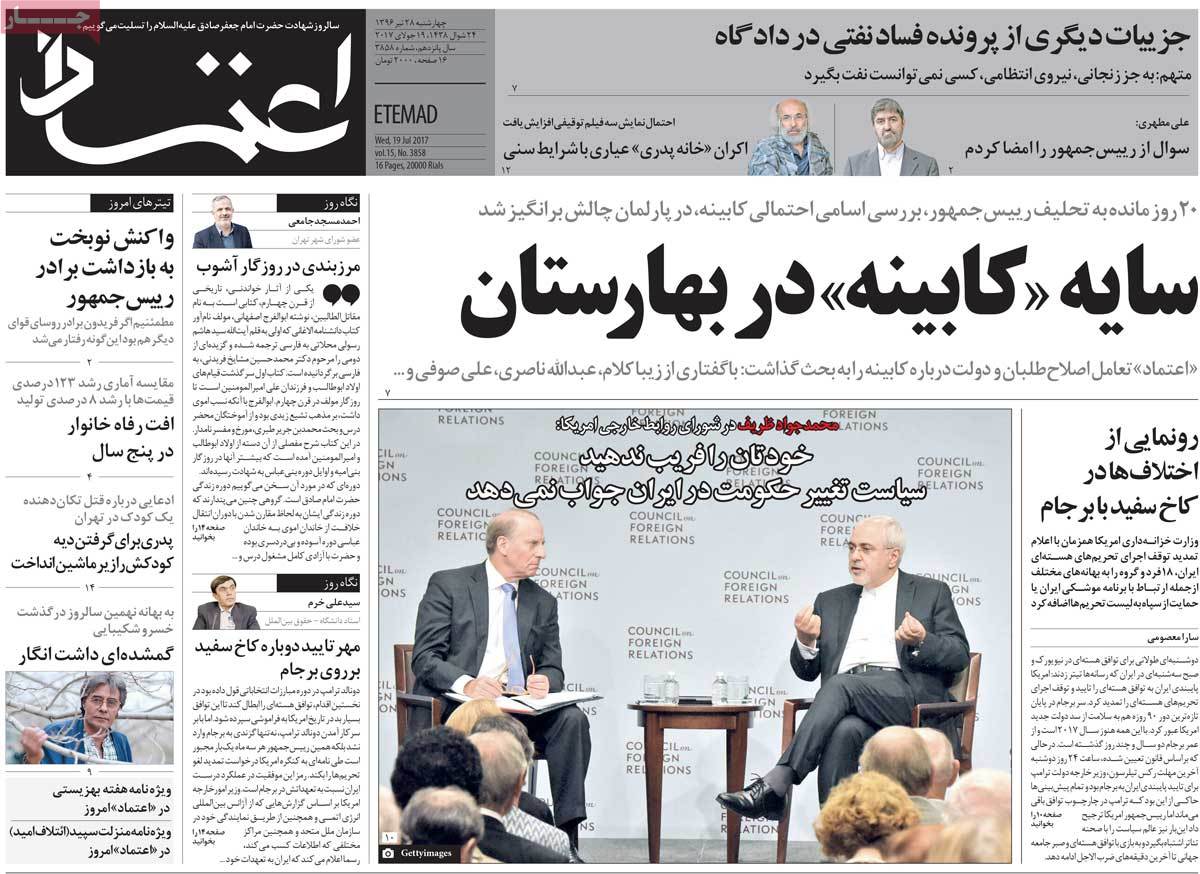 1- First VP: We Won’t Let Them Prevent Foreign Investment through Their Brouhaha 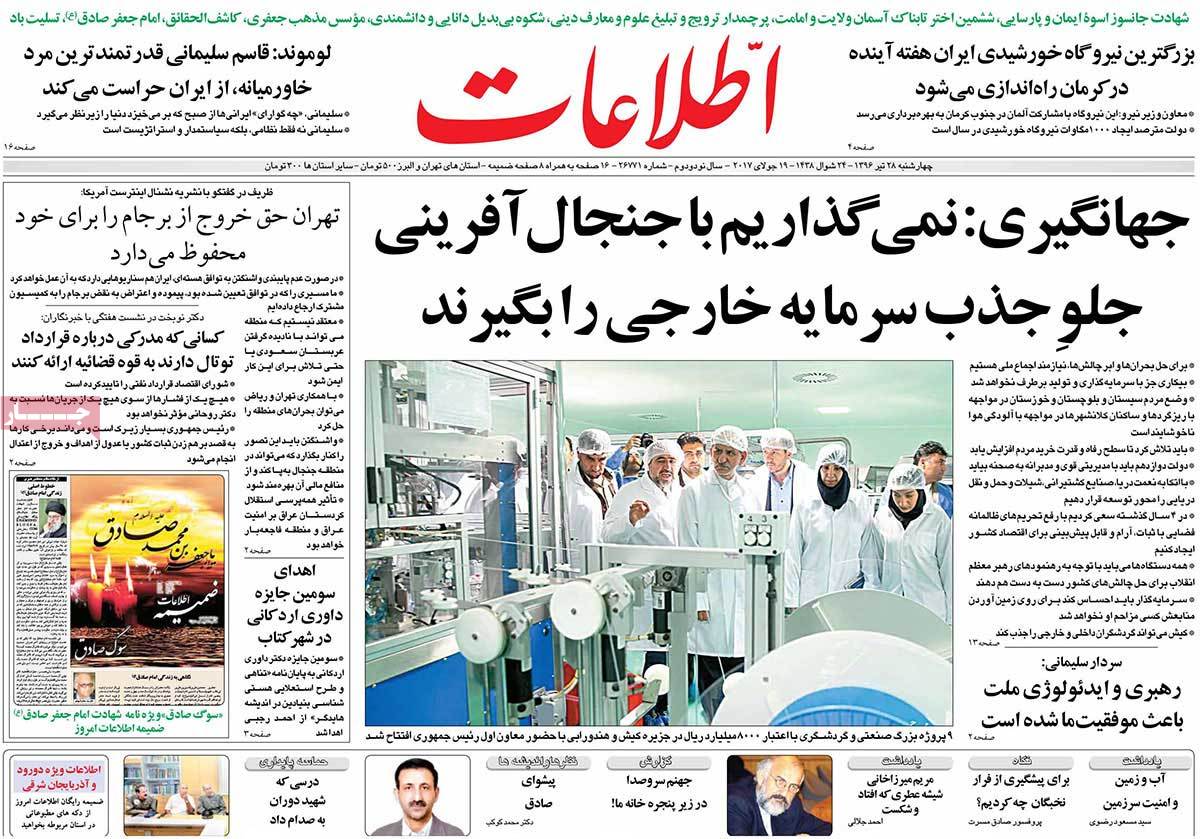 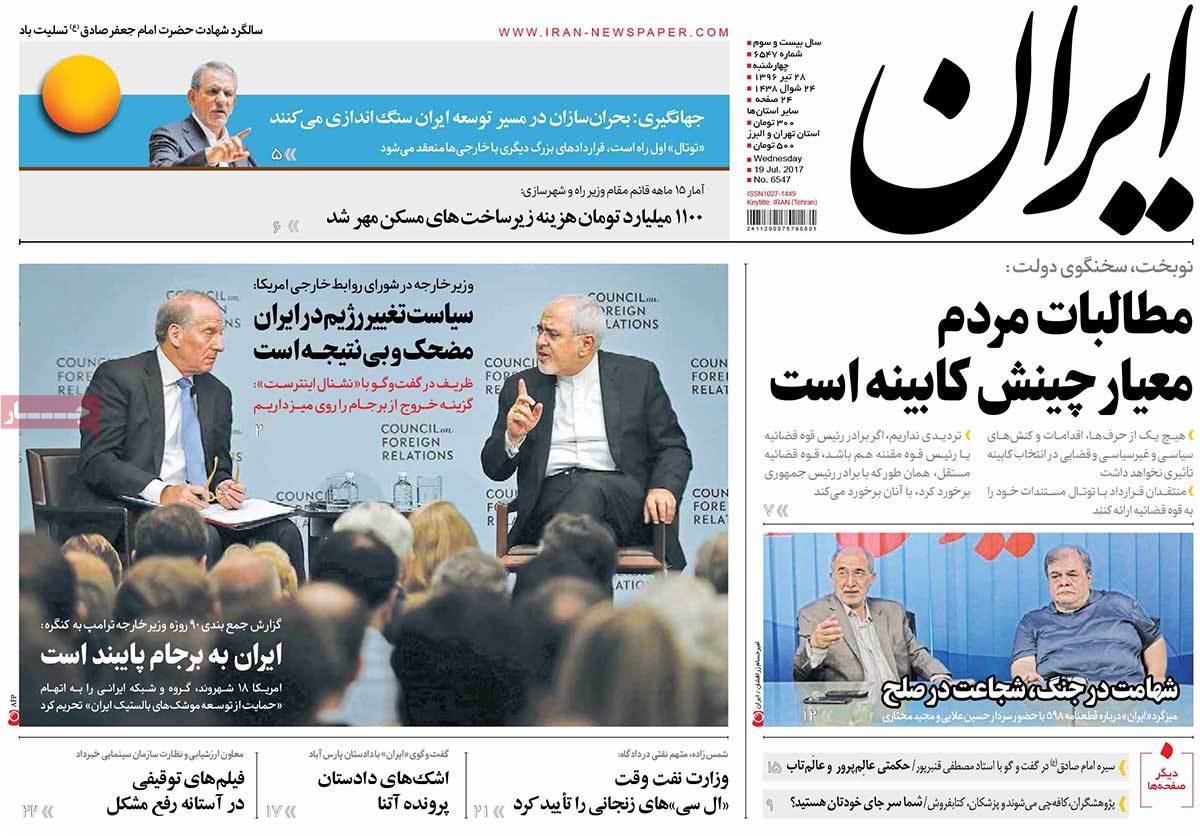 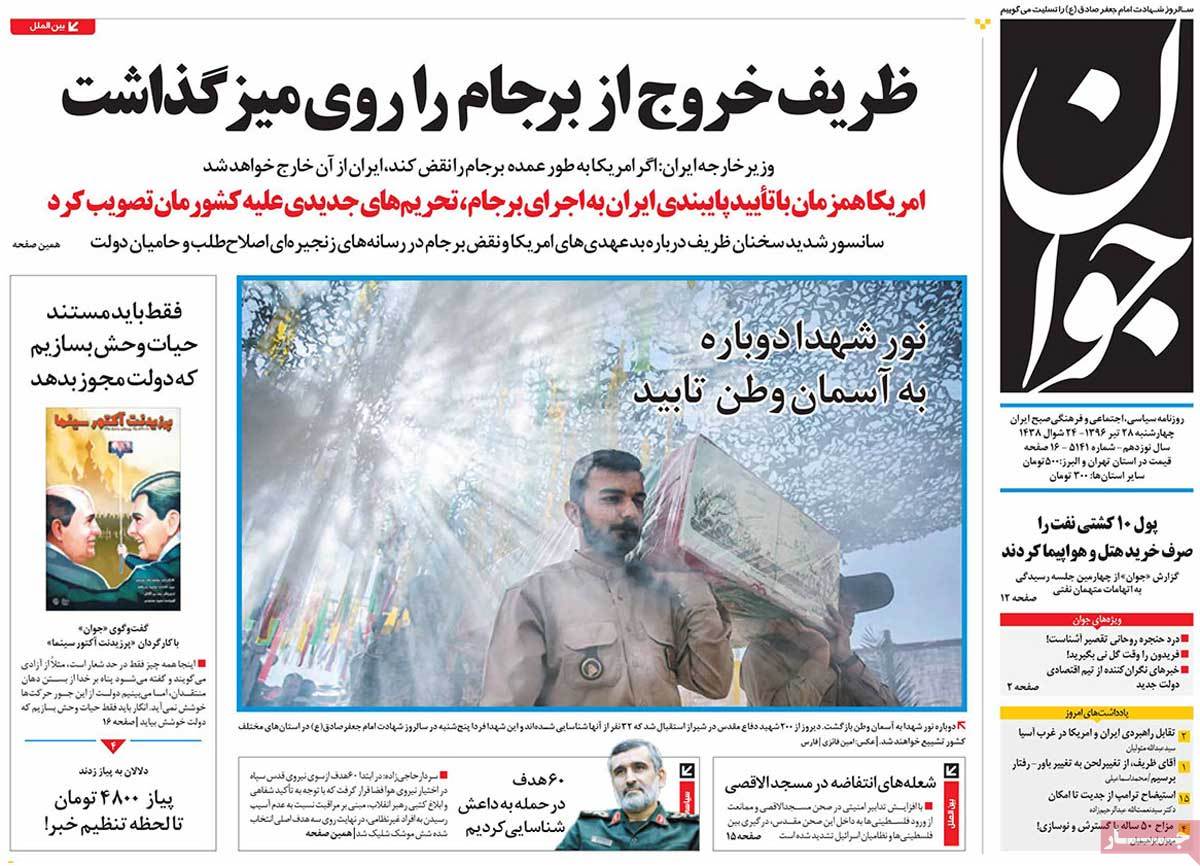 1- Zarif: US Should Be Realistic, Regime Change Not to Work in Iran 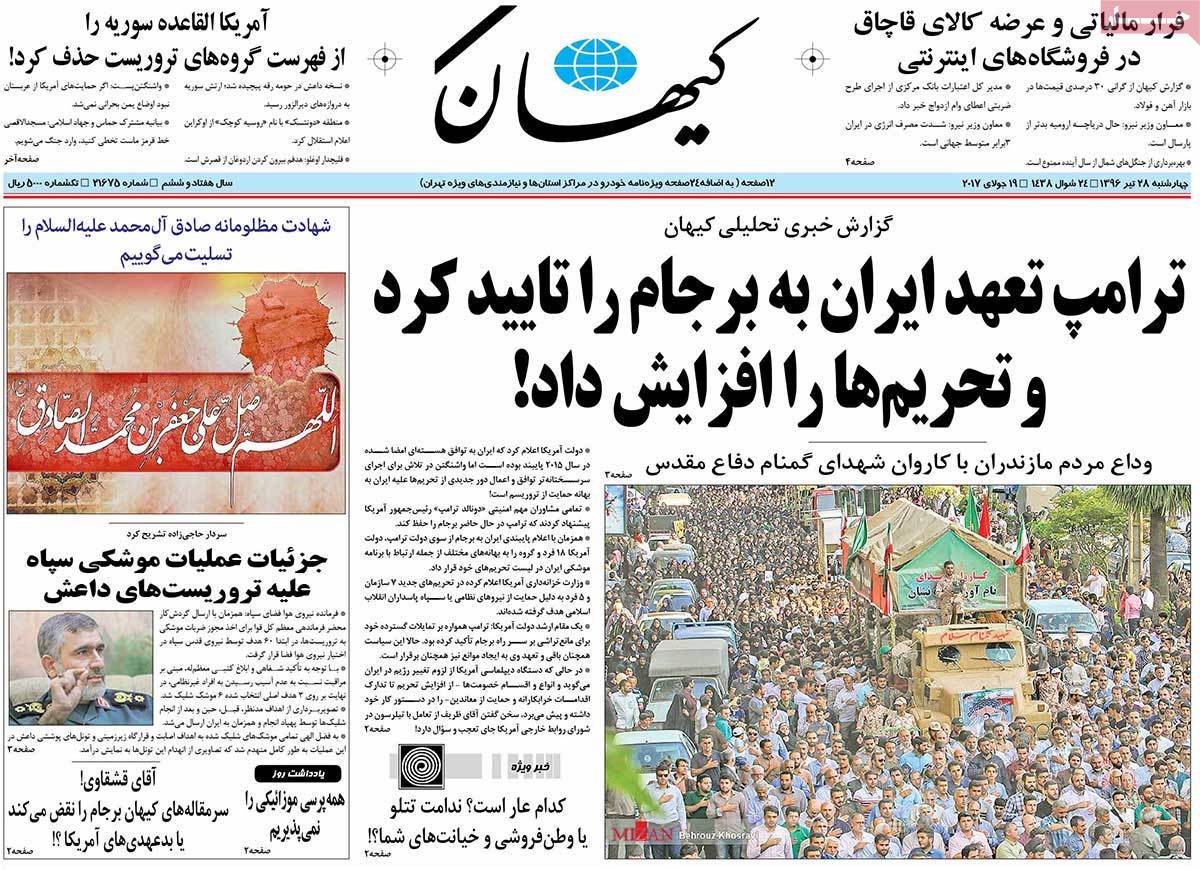 1- Zarif on US ‘Regime Change’ Rhetoric: Don’t Kid Yourself!

2- All Nationals Equal before Law: Spokesman Quotes Rouhani as Saying on Brother’s Arrest 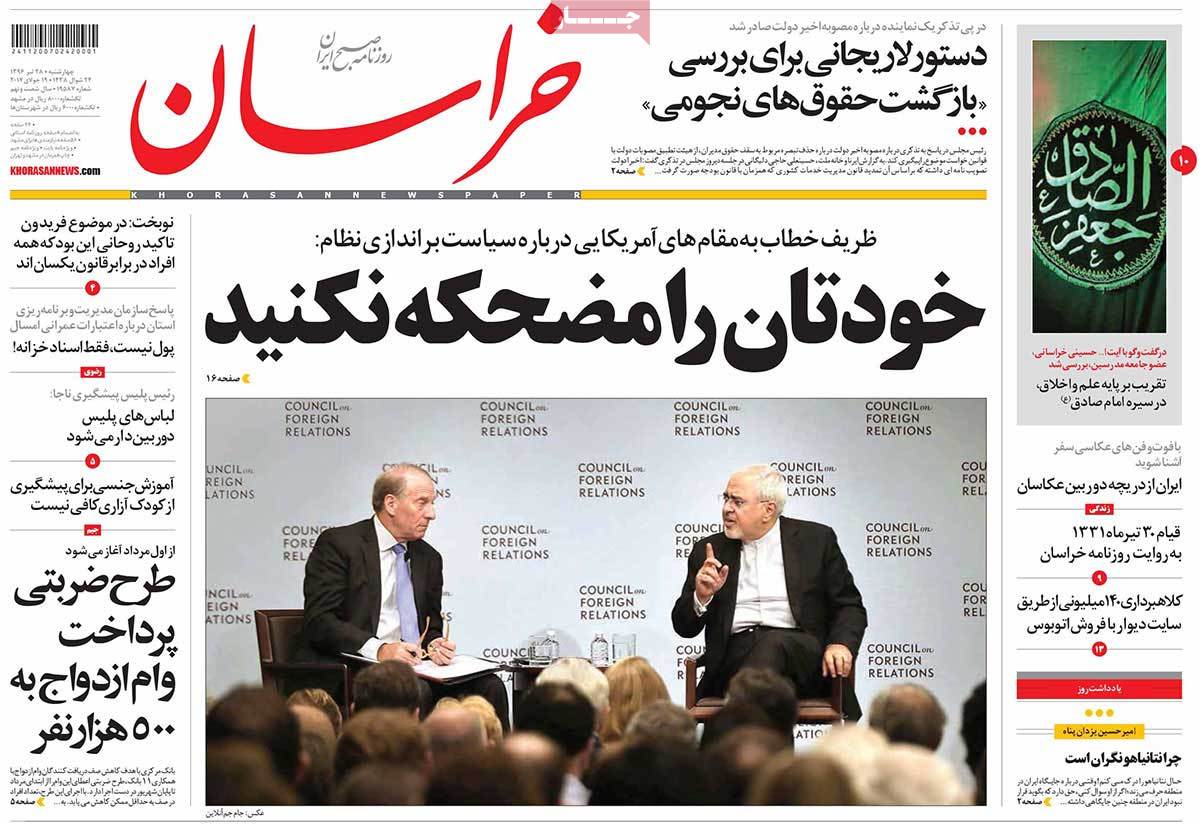 1- Speaker: Iran Parliament to Stand against US Moves 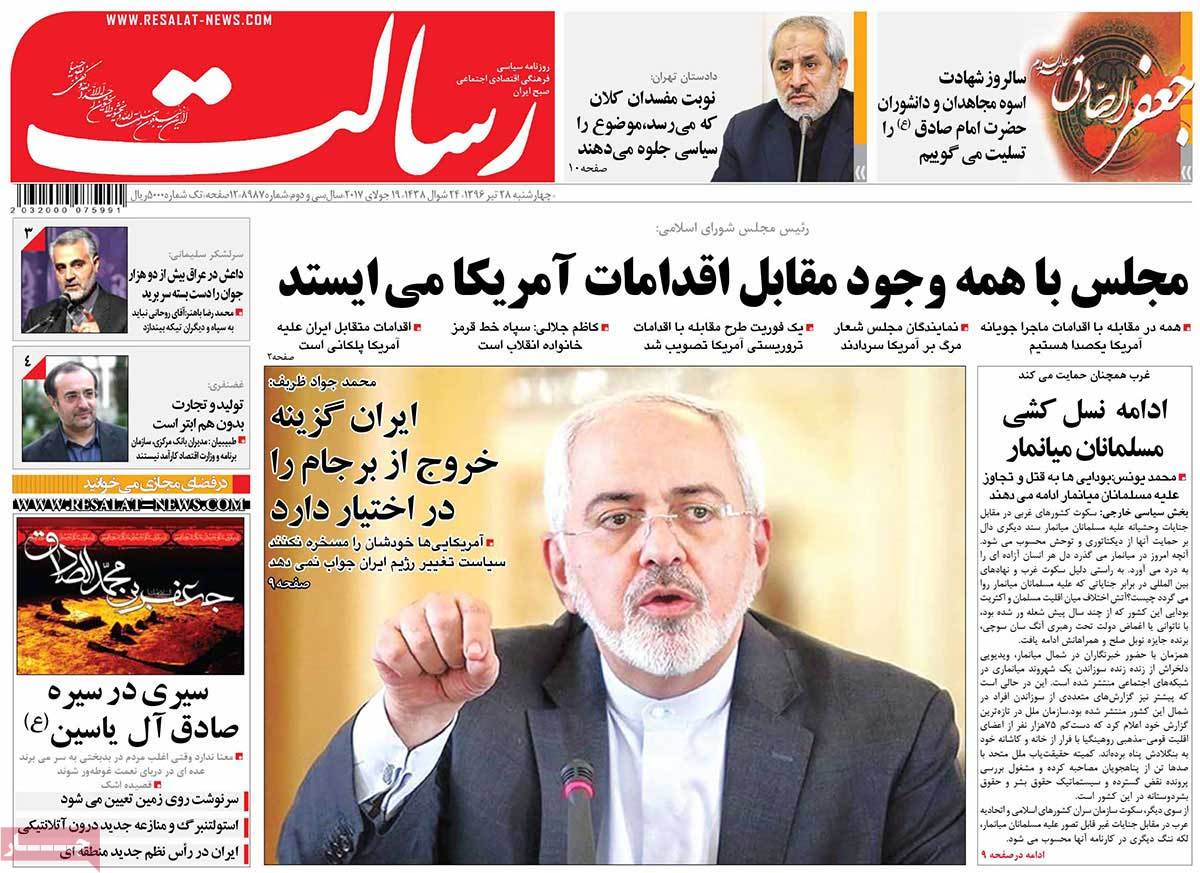 1- Based on Leader’s Order, Iran Should Attract $200bn worth of Investment: First VP 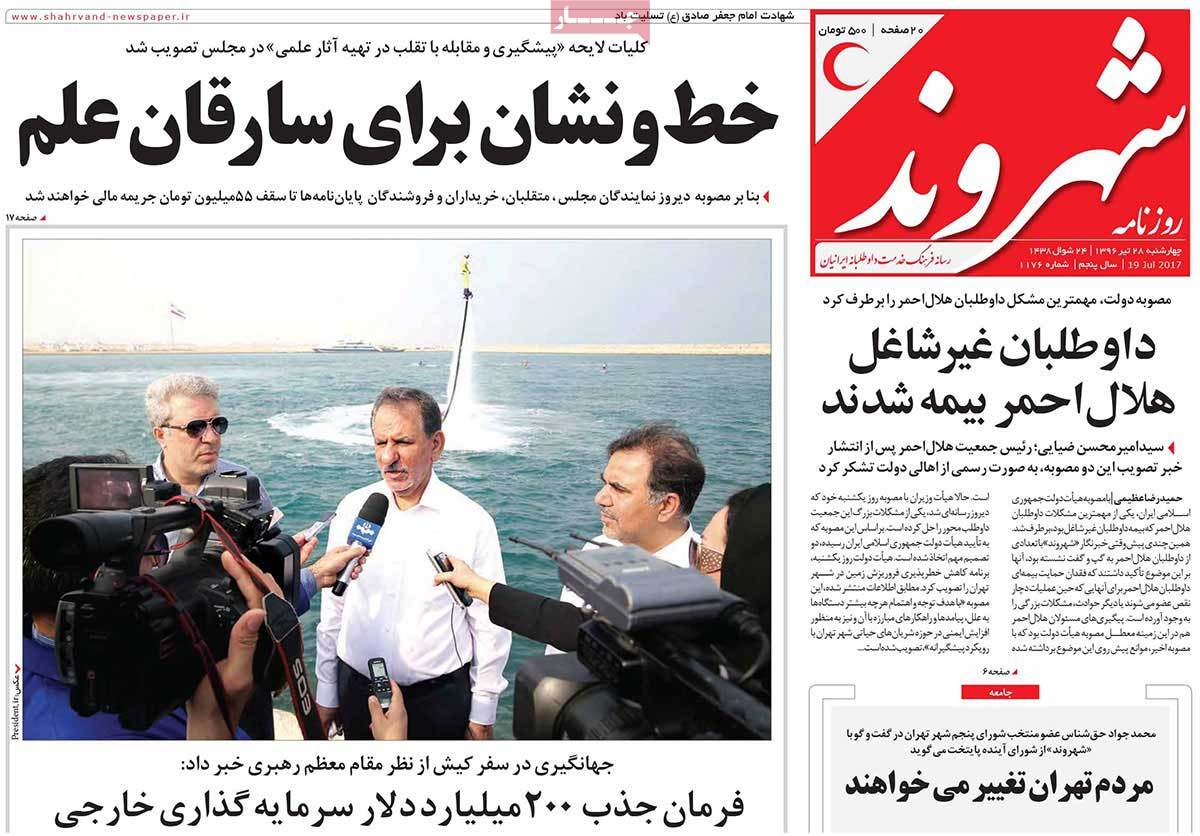 1- Zarif in New York: Iran Not after War with Saudi Arabia

2- No One Can Make a Fuss to Prevent Signing Deals: First VP 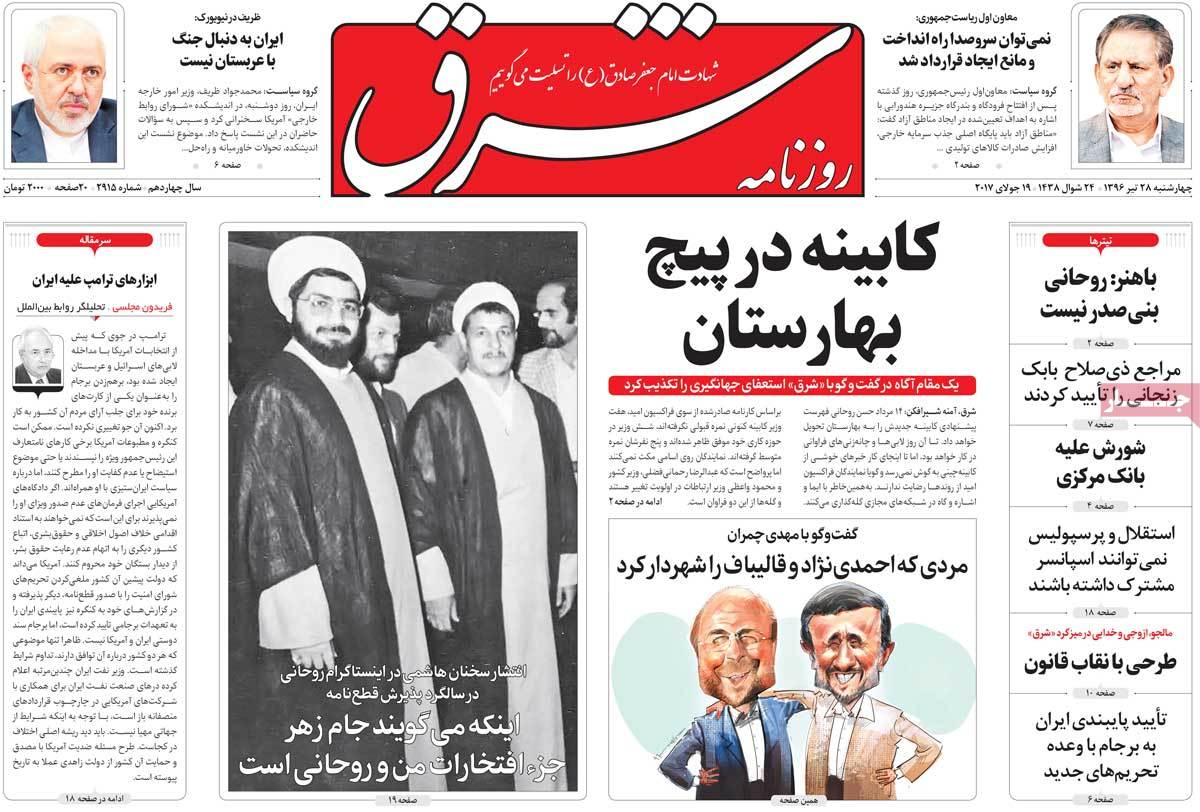