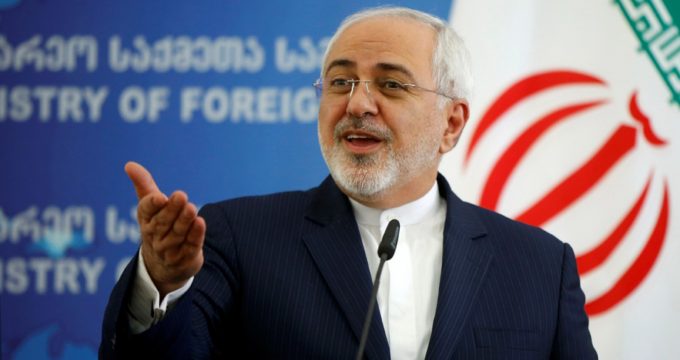 Tasnim– Iranian Foreign Minister Mohammad Javad Zarif said Tehran’s missile program is merely defensive in nature, stressing that the Islamic Republic will never use its ballistic missiles except for “self-defense”.

“We need our missiles to make sure that another Saddam Hussein won’t hit us again…we don’t have nuclear warheads. Missiles are the basis of our defense,” Zarif said on Monday addressing a meeting at the Council on Foreign Relations (CFR) in New York.

He added, “We will never use them except for self-defense”.

Elsewhere in his remarks, the top Iranian diplomat referred to a recent US decision to impose fresh sanctions against Iranian individuals and entities, saying, “When the US started to impose sanctions, we only had 200 centrifuges. During negotiations, we had 20,000. I do not believe in sanctions. Period. I can tell you that sanctions don’t work.”

He added that the US should reconsider its approach to sanctions.

Zarif said this “creates the impression in Iran that the United States hostility toward Iran will never end.”

The Iranian official further said the International Atomic Energy Agency (IAEA), “which is hardly a sympathizer for Iran,” has verified Tehran’s compliance with the agreement.

But unfortunately, he said, the US has not complied, and the six parties to the agreement will be meeting in Vienna on Friday to examine Iran’s complaints about the US failure to carry out its obligations.

Iran and the Group 5+1 (Russia, China, the US, Britain, France and Germany) reached the 159-page nuclear agreement in July 2015 and implemented it in January 2016.

Since the historic deal was signed in Vienna, the IAEA has repeatedly confirmed the Islamic Republic’s compliance with its commitments under the JCPOA, but some other parties, especially the US, have failed to live up to their undertakings.

Responding to a question about whether Iran has received any signals from the Trump administration, positive or negative, Zarif said, “We receive contradictory signals. So we don’t know which one to interpret in what way.”

Zarif also criticized Saudi Arabia for supporting terrorist groups in the region, saying Arab states primarily “have been incapable” of addressing the basic needs of their people which has given rise to anger, resentment and incitement.

He said, however, that Iran and Saudi Arabia can and should work together to end the conflicts in Syria and Yemen, where they support opposing sides.

“We don’t need to fight to exclude each other from the scene in the Middle East,” he said, “because in the end neither will be able to exclude the other.”

He added that “extremist forces are as much a threat against us, but even more against them.”