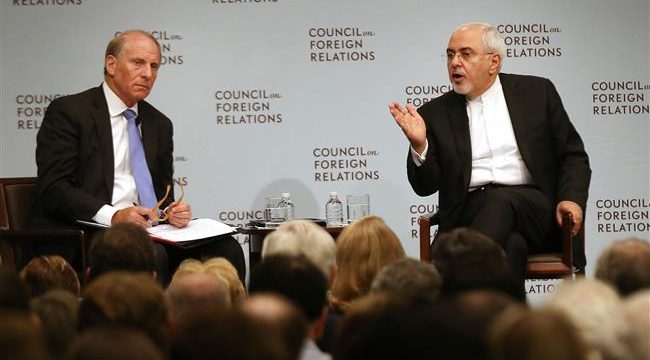 IRNA – Tehran is “a serious partner for all countries” in the fight against the common enemy, Iranian Foreign Minister Mohammad Javad Zarif says.

“…, because we believe that at the end of the day, these extremist, these Takfiri forces are as much as threat against t us but even more a threat against them (the countries),” Zarif said Monday speaking with Richard Haass at the Council of Foreign Relations.

“Our region has been the scene of many foreign interventions that have an internal dynamic,” said the foreign minister, referring to the Middle East.

“Extremism is on the rise as a consequence of the US [2003] attack on Iraq,” Zarif said.

Zarif went on to point to the ongoing war in Yemen and Syria, calling for an end to the crisis.

“If we don’t agree with each other about the situation in Yemen and Syria, … we can still work together in order to bring these situations to an end,” he said.

“We believe nobody is gaining from continuation of the conflict in Yemen,” Iran’s top diplomat added.

“When we were the victims of the chemical weapons, nobody cared,” he said.

Zarif said as a young diplomat he in a meeting with the president of the United Nations Security Council in 1985, raised the issue of chemical weapons, “…, telling him the chemical weapons were being used in Iraq-Iran war.

“The president of the UNSC told me flatly “I’m not going to listen to you!”” he said.

Zarif also pointed to the mixed signals sent to Iran and the region in recent months by Washington, saying, “We receive contradictory signals, so we don’t know which one to interpret in what way.

“Iran is serious about the nuclear deal. We believe that the nuclear deal can lay the foundations not the ceiling,” he said in reference to the Iran deal, known also as the Joint Comprehensive Plan of Action (JCPOA).

Asked about Iran’s satisfaction over the level of communication with Washington and the White House, Zarif answered “It is important o have a better understanding.”

“Possibilities for interaction are there; we take advantage of these possibilities. But certainly, I mean, it’s not like with the situation with the previous administration,” he said.

He went on to emphasize ineffectiveness of the Western-imposed sanctions, saying, “The sanctions do not work.”

“We’re ready to engage with anybody on reduction of military expenditures,” he said.

“Our missiles are the means of our defense, we’ll never use them except in self-defense, never,” he added.