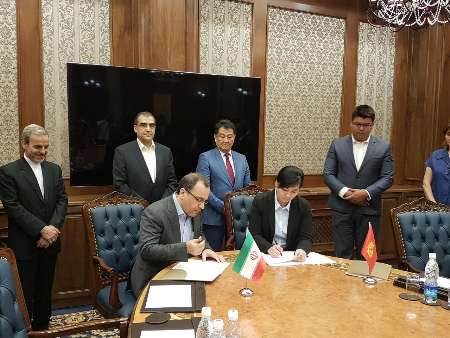 IRNA- Iran’s Minister of Health and his Kyrgyz counterpart singed an agreement on Tuesday, devising roadmap for enhancing healthcare and medical cooperation between the two nations.

Hassan Hashemi, after signing the agreement with and the Kyrgyzstan Minister of Health Taalaibek Batiraliev, told reporters that along with political cooperation, the two countries should utilize all available opportunities to expand ties, particularly in the private sector.

“Unfortunately, we are restricted to our domestic markets, while there is high potential for the two nations to compete with big international companies,” he said.

Some of our neighbors seized the opportunity to engage with regional markets and they benefited much from the conditions created 25 years ago following the independence of former Soviet republics and they have captured the markets, Hashemi said.

Batiraliev said for his part that now the path is quite prepared for implementation of the agreements between Iran and Kyrgyzstan as the Presidents of the two countries remain to be supportive of talks between officials of the two nations.

On Monday evening, the Ministers of Health in a preliminary meeting with his Kyrgyz counterpart discussed enhancing healthcare bilateral ties, including creating a committee to pursue implementation of the agreements in healthcare, medicine, and vaccine production.

Hassan Qazizadeh Hashemi, Iran-Kyrgyzstan ties, Taalaibek Batiraliev July 18, 2017
47 Daesh terrorists killed in Iraqi army operations in Tal Afar
Do not laugh at yourself! The change of the regime in Iran does not answer: Zarif