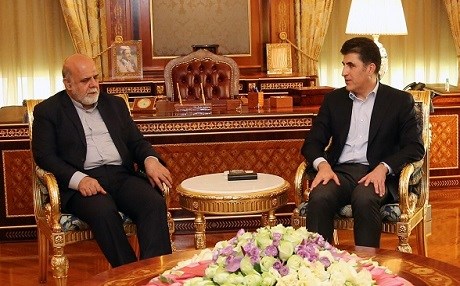 The two spoke about outstanding issues between Erbil and Baghdad with Barzani telling the Iranian representative that the Islamic Republic could play a positive role, according to a statement released by the Kurdistan government.

Resolving the problems between the central and regional governments “needs serious dialogue,” the statement recounted of their meeting. “And the Islamic Republic of Iran can play a positive role in this regard.”

Masjedi, in turn, spoke of the need to develop relations between Erbil and Tehran in every field.

Masjedi, who has ties with Iran’s elite Quds force, arrived in Baghdad in April.

Following his meeting with Barzani, he reportedly met with members of the Patriotic Union of Kurdistan (PUK).