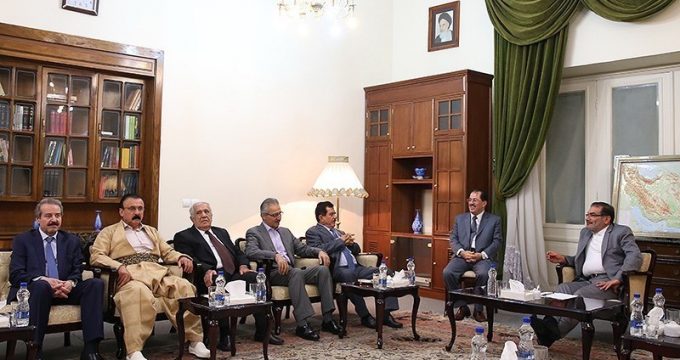 Press TV – A senior Iranian official has warned that a plan by Iraq’s semi-autonomous Kurdistan region to hold an independence referendum will weaken the entire Arab country.

Secretary of Iran’s Supreme National Security Council (SNSC) Ali Shamkhani made the comment in a meeting in Tehran on Monday with deputy secretary general of the Patriotic Union of Kurdistan, Kosrat Rasul Ali, and the Chief of the Executive Body of the PUK’s Political Bureau, Mala Bakhtiar.

Shamkhani said the independence plan would “in fact put pressure on and isolate Iraqi Kurds and weaken Kurdistan and eventually all of Iraq.”

The Iranian official added that the plan went against the policies and initiatives of the Iraqi officials and was not a priority and requirement of the country’s people.

Shamkhani further noted that certain regional and extra-regional countries sought to undermine Iraq and big countries in the Middle East, stressing that such arrogant plots should be thwarted by remaining vigilant and paying attention to the interests of the nation and those of the Muslim world.

He said the Islamic Republic wishes “security, economic development and prosperity” for people, parties and groups in the north of Iraq whose realization would  prevent the activities and spread of terrorist groups.

The president of Iraq’s semi-autonomous Kurdistan Regional Government, Masoud Barzani, announced on Twitter in June that the northern territory would hold an independence referendum on September 25 not only in the three provinces that make up the Kurdish region, but also in the areas that were bone of contention between the Iraqi Kurdistan Region and the central government in Baghdad.

After the announcement, the Iraqi government issued a statement in response that it would reject any unilateral move by Kurdish regional authorities to press for independence.

Iraqi Prime Minister Haider al-Abadi said on June 13 that the Kurdish minority’s decision to hold an independence referendum was untimely.

“Every part of Iraq has aspirations and has a dream, and we respect that, even if we disagree with it. We live in one homeland and they are our partners,” Abadi said.

Elsewhere in his remarks, the SNSC secretary further pointed to the liberation of the Iraqi northern city of Mosul from the grip of Daesh Takfiri terrorist group and said it would herald a better future for an integrated Iraq and foil foreign plots aimed at creating a division in the country.

“A secure, stable and united Iraq promotes the country’s sustainable security, stability and progress and friendly countries to Iraq and its well-wishers must support such an approach,” Shamkhani pointed out.

Delivering a formal statement aired by the state television on July 10, the Iraqi premier formally declared the victory of the country’s forces over the Daesh Takfiri terrorist group in Mosul, one day after Iraqi military and Popular Mobilization Forces took full control of the city.

The recapture of Mosul marks the biggest blow to the Takfiri extremist group since it declared its so-called caliphate three years ago.

Rasul Ali, for his part, said Iran had always played a leading role in supporting Kurdistan, particularly in countering Daesh terrorists, and prevented a security disaster in this region.

He said the Islamic Republic and the Kurdistan region had deep-rooted and historical bonds.