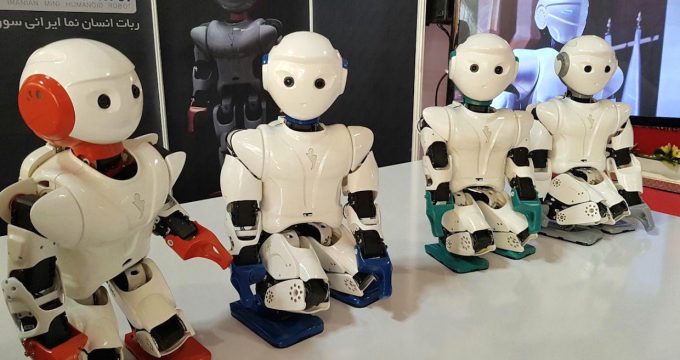 Spectrum.ieee – Over the last several years, a team of roboticists at the University of Tehran has been working on increasingly large and complex life-size humanoids. For their latest project, however, the Iranian researchers decided to build something smaller—and cuter.

Surena Mini is a knee-high robot with a sleek 3D-printed body, articulated limbs, and a round head with two camera-eyes. Twenty small servomotors power its arms, legs, and neck, allowing the little robot to walk, gesture, and dance:

“The main purpose of this robot is to provide researchers and students with a reliable robotic platform for educational and research applications,” Aghil Yousefi-Koma, a professor of mechanical engineering at the University of Tehran, told IEEE Spectrum.

He added that his group also has plans to offer the robot “for helping autistic and deaf children.”

A team of 15 researchers at University of Tehran’s Center for Advanced Systems and Technologies worked for over a year to design and build Surena Mini, which is 50 centimeters tall and weighs 3.4 kilograms.

Packed inside the robot are a compact computer with an Intel Core CPU, cameras and infrared sensors, speakers, and an IMU, or inertial measurement unit. Its hands aren’t designed for grasping objects, but Surena Mini can push on small things—or karate-chop them:

A little over a year ago, the same group unveiled Surena III, an advanced adult-sized humanoid designed for researching bipedal locomotion, human-robot interaction, and other challenges in robotics.

Surena III, equipped with cameras, 3D sensor, and a computer running ROS, or Robot Operating System, was able to pick up bottles, imitate a person’s gestures, and stand on one foot.

The Iranian roboticists plan to continue working on Surena III, but they also want to explore the possibility of creating marketable products based on their research, Professor Yousefi-Koma explained, and one of the ideas they had was building a “kid-size version of Surena.”

But the Iranian robot has yet to show that it has some of the same skills already demonstrated by those other humanoids. Nao and Robotis OP2 have been used in research labs, schools, and hospitals for nearly a decade. Both are also used in the RoboCup robot soccer competition.

Despite their size, these little robots are pricey. Nao and Robotis OP2 each sell for nearly US $10,000. Professor Yousefi-Koma said Surena Mini will be available for 260,000,000 Iranian rials, or $8,000, but he hopes the cost to come down if the robot can be produced in large batches.

One of the biggest challenges of the project, he explained, has been implementing features like face detection and voice recognition, which would let the robot perform with a greater level of autonomy. His team has developed such capabilities for their large robots, but replicating them using Surena Mini’s limited hardware is a trickier task.

To program the robot, advanced users can modify the source code to create different behaviors. But the researchers wanted to make Surena Mini accessible to less experience users as well. So they created a programming environment with a graphical interface “designed to be attractive and user-friendly,” Professor Yousefi-Koma said.

“It gives users full access to all available features of the robot,” he added, “so even beginners can make the robot walk and move its arms and head.”