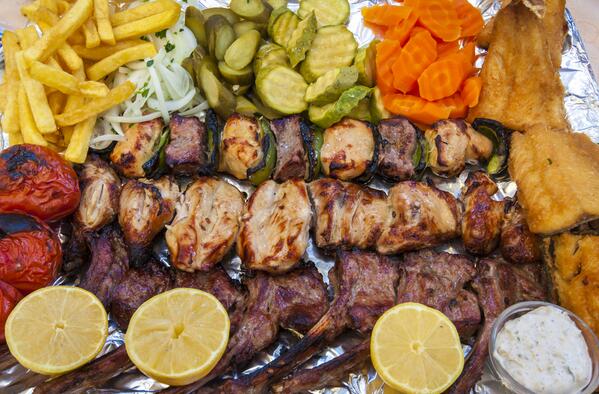 Iran Wire – Iranian or Persian cuisine is a medley of delectable dishes that are as rich and nuanced as Iranian culture and history itself. Influenced by Turkish, Greek, Kurdish, Middle Eastern, Caucasian, Mesopotamian and Russian foods, Iranian food is truly unique, even though it shares a number of similar dishes with Turkey and other nearby countries.

While rice and fresh Persian breads make up the basis of Iranian cuisine, dry and fresh herbs, saffron and spices are fundamental to most dishes. And, although the food tends to not be spicy, dishes vary in both texture and taste depending on the city or province in question.

Most Iranian dishes contain meat, which could be anything from chicken to lamb or beef — just not pork, as Islam prohibits it. Although there are limited options for vegetarians, Iranian food is highly varied so there’s sure to be something for everyone. For those new to the world of Persian food, here are our top 10 recipe suggestions – all delish and very much Persian. Bon appetit! Or noosh-e jan, as they say in Iran.

The kebab, which should not be confused with the doner kebab found in many European countries, literally means “barbeque skewer,” and can refer to both meat and vegetables, such as tomatoes and mushrooms. Kebabs are normally served with rice called chelo kebab or fresh bread, known as nan-o kebab.

Kebab koobideh is the most popular type of kebab in Iran and is made with minced lamb or beef and chopped onions. Koobideh refers to the way the meat is prepared, which usually involves beating the lamb or beef with a wooden mallet on a black flat stone. You can also get barg, shishlik and chenjeh kebabs.

When the barbecue meat is chicken, the dish is called jujeh kabab, and the meat can be either on or off the bone. It is normally marinated with onions, lemon juice and saffron.

Read more about kebabs  — and make them yourself.

This dish, also known as fesenjoon stew, is another traditional dish that can be found across all of Iran. Slow-cooked meat, generally chicken or meatballs, are cooked with pomegranate syrup and walnuts to make this scrumptious dish. A hearty and comforting meal, it is served in autumn and winter. Be sure to mention the recipe to Iranians if you want to impress them with your knowledge of Persian food and culture.

For making Iranian stews like ghormeh sambzi, gheymeh and fesenjan, it is best to cook at a high temperature at the beginning of the cooking process. Once the stew begins to boil, turn right down and cook for as long as possible on a low heat to ensure the meat is very tender and the flavors deepen.

Read more about Fesenjan — and make it yourself.

Ghormeh sabzi is the nation’s favorite stew. Generally served alongside a variety of other dishes at parties, it is a green stew and contains parsley, spinach, leeks, coriander, kidney beans, dried lemons, dried fenugreek leaves and turmeric-seasoned lamb or beef, all of which gives it a tart, but wonderful, flavor.

Baghali polo — or lima bean rice — is a mouthwatering, classic Persian dish served with meat. It is often made with young, fresh fava or lima beans and dry or fresh dill. On occasion, Iranians use butter or ghee when cooking the rice, which goes great with well-cooked lamb shank.

Tahchin — known as “rice cake” among many non-Iranians because of its cake-like shape – has a crispy outer crust and soft inner section. The dish contains rice, yogurt, saffron, egg and chicken, although you can also make it with vegetables, fish and different types of meat.

Kashke bademjan is popular as both a Persian appetizer and  a main course. Bademjan means eggplant in Persian and kashk is a kind of yogurt. In addition to eggplant and kashk, the dish also contains onion, turmeric, garlic, and dried mint. This is a vegetarian dish.

Ash-e reshteh is a thick, curative noodle soup. Reshteh translates as “noodles”, but it is actually a yoghurt-based product. The dish also contains lots of fresh vegetables, chickpeas and beans. It is a great recipe for cold, winter days or dinners with family or friends.

Zereshk polo, which literally translates to dried barberries and rice, is another delicious Persian recipe. It is a rice-based dish with the perfect combination of sour and sweet. It’s great with roasted chicken and saffron.

Haleem is a thick Persian porridge that is either eaten during Ramadan or in winter for breakfast. It contains wheat and lamb or turkey and is slow cooked overnight so it’s ready to be eaten first thing.

Gheymeh — sometimes spelled qeymeh — is a Persian meat stew made with tomatoes, split peas, onions and dried lime. It is customary to serve rice and fried potatoes on top of the dish, and some Iranian restaurants serve it with eggplant too.