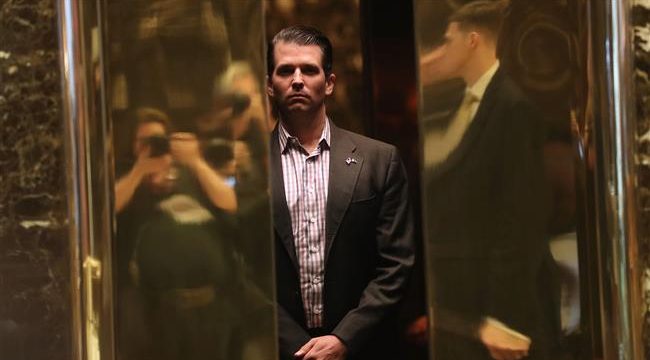 Press TV- US President Donald Trump’s eldest son has hired a lawyer to represent him in the ongoing investigation into his father’s alleged “collusion” with the Russian government.

Trump Jr. hired New York lawyer Alan Futerfas on Monday, shortly after he confirmed a New York Times report about his meeting with a Russian lawyer in the run-up to last year’s US presidential election.

According to him, the June 2016 meeting at Trump Tower in New York was cut short as the information provided was “vague and made no sense.”

Futerfas, who specializes in criminal defense and his clients have allegedly included a Russian hacker, dismissed the allegations in an interview with Reuters, calling the report “much ado about nothing.”

“I look forward to assisting Donald Jr. and, quite frankly, there is nothing to all of the media buzz about the June 9th, 2016 meeting,” the New York lawyer told Reuters. “That will be proven to be the case.”

A follow-up report by the Times on Monday shed more light on the meeting by revealing the content of an email that was sent to Trump’s son beforehand.

Citing three people with knowledge of the email, the paper said publicist Rob Goldstone had clearly stated in the message to Donald Jr. that the Russian government was the source of the potentially damaging information about Clinton.

The email and its content were left out of a statement that Donald Jr. released to the media about the meeting.

“It’s a very serious development,” Representative Adam Schiff, the top Democrat on the House Intelligence Committee, told MSNBC. “It all warrants thorough investigation. Everyone who was in that meeting ought to come before our committee.”

The FBI as well as congressional committees are investigating whether the Russian government coordinated with Trump associates during the 2016 campaign and transition.