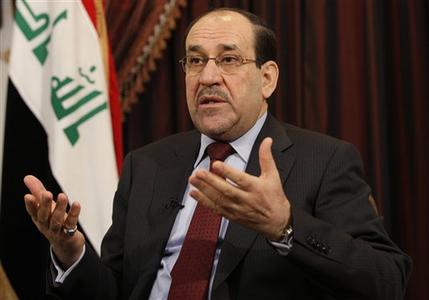 IRNA – Vice President of Iraq Nouri al-Maliki in a message released on the occasion of the liberation of Mosul from Daesh, has praised Iran’s efforts in fighting the Takfiri terrorist group.

In the wake of official declaration of the liberation of Mosul, a former stronghold of Daesh (ISIS) terrorists, al-Maliki in his message to Iraqi people said that his first congratulation should go to Grand Ayatollah Ali Sistani for his historic 2014 Fatwa that contributed to the liberation of the Iraqi city.

He also welcomed those who stood by Iraqi government and people, underlining supports provided by the Islamic Republic in the fight against terrorists.

Iran pioneered in providing help for Iraq to fight the terrorists, he said.

In his message released Monday evening, the Iraqi vice president felicitated the victory to the country’s Army, the Popular Mobilization Forces, police and security forces over Mosul liberation.

Al-Maliki went on to say that Mosul liberation was a firm response to all the conspiracies, sectarian and terrorist plots which are supported by some governments.

Mosul fell in June 2014, when Daesh in an attack took control of the city. Iraqi forces launched the operation to retake Mosul on October 16, 2016.

The eastern part of Mosul was recaptured from Daesh in about three months and the most populated part of the city, known as the Old City of Mosul, in the western bank of Tigris River was liberated in recent days.

Iraq and Syria have been targeted by Daesh and other extremist groups supported by West and some regional counties.