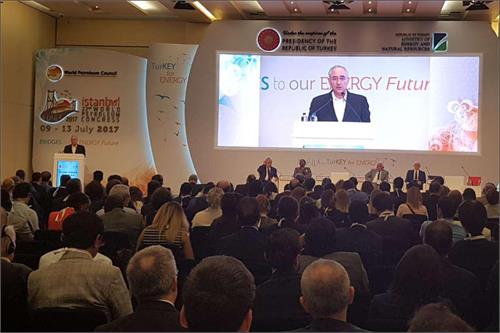 During his address, the official spoke about taking leadership in responsible operation in the energy sector, and said, “It is recognized that business cannot be as usual in energy production, distribution and use.”

He also discussed the ambitious objectives of SDG 7 for 2030, saying the goals include universal access to energy, doubling the share of renewable energy in the global energy mix and doubling the global rate of improvement in energy efficiency.

He said more than 3 billion people suffer from energy poverty in the world and have no access to clean cooking.

Zamaninia predicted that by 2040, gas supersedes oil and constitutes 26.6% in the global energy basket.

The National Iranian Oil Company (NIOC) is running a stand at the 22nd World Petroleum Congress that will be run until 13 July, 2017.

NIOC stall covers 280 square meters of ground in the congress.

Furthermore, 23 articles for poster display by the NIOC have been approved in the congress.

Turkey welcomes all industry stakeholders to Istanbul in 2017 to the 22ndWPC.