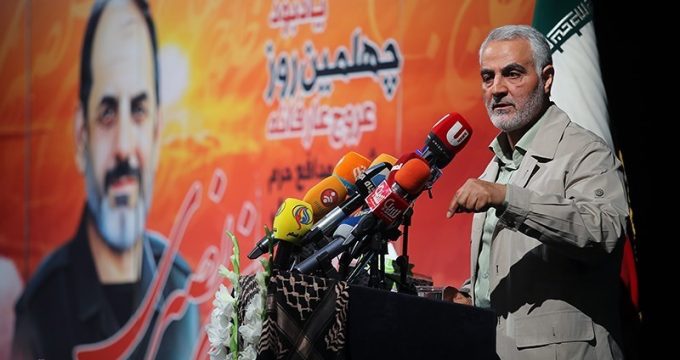 IRNA – Quds Force Commander Major General Qasem Soleimani said on Monday that Daesh (ISIS) is a heavy catastrophe which is unprecedented in the human being history.

Speaking in a local ceremony, top Iranian general hailed the role of martyrs in defeating Daesh in Mosul and noted that the terrorist group has not only targeted Iraq sovereignty, but also it was a big threat against world security.

Islamic Republic have not acted like the US who took Iraq money but avoided to arm the Iraqi Army in needy time but Islamic Republic dispatched Iraq’s Sukho-24 immediately after the Iraq government request, the commander noted.

He said that victory of Iraq over Daesh in Mosul is a victory for the whole world and the human being.

Soleimani hailed the role of Iraqi Religious Leader Ayatollah Sistani and the volunteer forces in defeating Daesh, adding that the people of world are indebted to Iraqi and Syrian people.