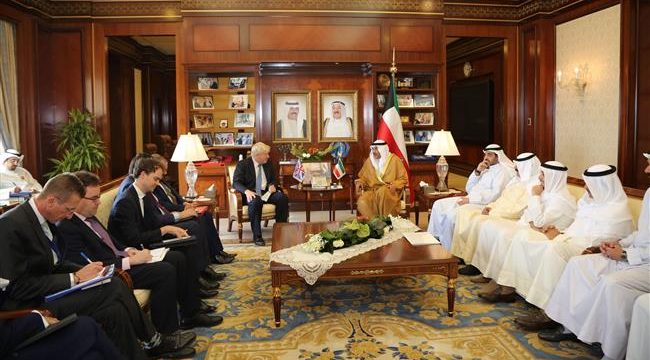 Press TV – British Foreign Secretary Boris Johnson has called on Saudi Arabia and its Persian Gulf allies to end their blockade and siege of Qatar as he continued his tour of the Persian Gulf.

He further expressed UK’s support for Kuwait’s efforts to broker a solution to the row which is said to be the worst to hit the region since the formation of the Persian Gulf Cooperation Council (GCC) in 1981.

The top British diplomat further described the siege on Qatar as unwelcome but played down the possibility of a military escalation as “highly unlikely”.

“Everybody I have talked to said the opposite. No possibility of a military confrontation,” he said.

During his visit to Kuwait, Johnson sat down with Kuwaiti Foreign Minister Sheikh Sabah Al Khalid Al Sabah whose country has played a mediating role in the crisis.

Johnson earlier held meetings with officials from Saudi Arabia and the United Arab Emirates which have the most uncompromising stance in the dispute.

They presented Qatar with a list of 13 wide-ranging demands and gave it an ultimatum to comply with them or face unspecified consequences.

The demands included shutting down the broadcaster Al Jazeera, removing Turkish troops from Qatar’s soil, scaling back cooperation with Iran and ending ties with Egypt’s Muslim Brotherhood movement, which Doha refused to comply with.

Qatari Foreign Minister Sheikh Mohammed bin Abdulrahman Al Thani accused the Saudi-led quartet of “clear aggression”, saying they had enforced an “illegal blockade” to “try to force us to surrender our sovereignty.”

In a joint statement, the bloc’s foreign ministers said they regretted Qatar’s “negative” response to their demands and vowed to press ahead with their bid to isolate Doha.

“Turkey has brotherly relations with all (Persian) Gulf countries and has used all diplomatic tools to resolve the Qatar crisis,” Erdogan said during a press conference in Hamburg where he was to attend the G20 summit.

He also emphasized that Turkey did not approve of sanctions against Doha, urging regional countries, particularly Saudi Arabia, to settle the row in a short period of time.

“As I mentioned before, there won’t be any winners in the brothers’ fight,” Erdogan pointed out.