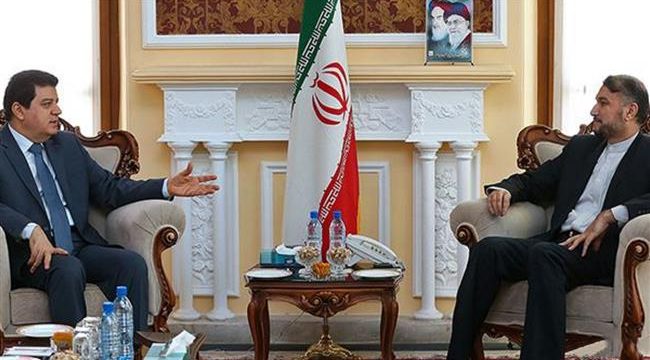 MNA – Parliament’s General Director for International Affairs Hossein Amir-Abdollahian said the choice and will of the Syrian people would be the only way to determine ultimate destiny of Syria.

He made the remarks in a meeting with Syrian Ambassador to Tehran Adnan Mahmoud, in Tehran on July 8, 2017.

Calling strategic and privileged the relations between Iran and Syria, Amir-Abdollahian emphasized that Syria stands at the forefront of resistance against the Israeli regime and the fight against terrorism and that it plays an honorable role in this regard.

He went on to point out the importance of the parliamentary ties between the two countries, adding “meetings and talks between Tehran and Damascus parliamentary officials are taking place with special attention on behalf of both sides and parliamentary committees of the Islamic Republic of Iran and the Syrian Arab Republic will meet in the near future.”

He also pointed to the common stance between Iran and Russia on the Syrian issue and stressed the importance of continued cooperation among the three countries.

Underlining that the White House’s review of its policy on Syria shows a change of tactics and not a change in the objectives of Syria’s enemies, Amir-Abdollahian said “since the outset of the crisis in Syria more than six years ago, enemies have been seeking to oust the country’s legal President Bashar al-Assad.”

He referred to the United States and Israel’s warmongering in the region and said both seek the protraction of crises in the Middle East in order to be able to sell more weapons to regional countries.

Amir-Abdollahian added that Washington and the Tel Aviv regime make efforts to prolong regional crises such as the continuation of Saudi Arabia’s violence against Yemen and threatening Syria with a military attack.

The Syrian envoy, for his part, pointing to the growing trend in Iran-Syria relations, said the Islamic Republic has a leading position in the region and its role in restoring peace and stability in the region is undeniable.

Noting that Tehran and Damascus have a close stance on many regional developments, Adnan Mahmoud said the US and its Western allies seek to undermine Iran’s regional influence.

He emphasized that Iran, Syria and Russia must continue with consultations to help Damascus solve the ongoing crisis.