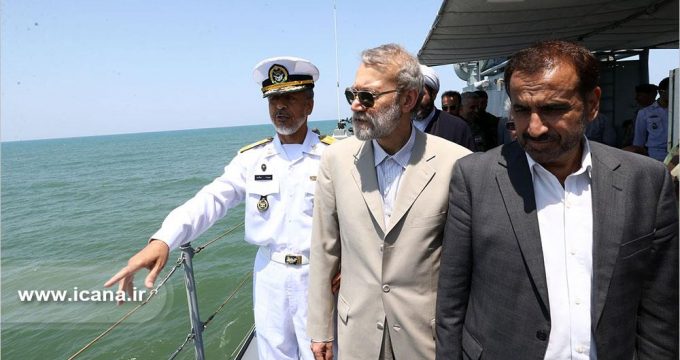 IFP – Iran’s Parliament Speaker says there must be no restriction on making investment in extraction of oil from the Caspian Sea.

In an address to a ceremony in Gilan province, Parliament Speaker Ali Larijani said investing in oil extraction in the Caspian Sea should be started.

“There is no concrete reason to stop the investment. So, we need to take seriously the development of oil industry in the Caspian Sea,” he added.

There are great capacities for improvements in various fields, he noted, according to a Farsi report by YJC.

“I think most of the problems including budget planning and optimization of water resources can be tackled through detailed programmes. Petrochemical industry is one of the most appropriate grounds for investment in Gilan Province which can create lots of jobs. The officials have to attract private sector for further investments in this field. The lawmakers are ready to provide the relative officials in the province with the required credits to press ahead with the projects.”

The parliament speaker also referred to the rainy seasons in the province and said building dams particularly rubber ones on the region’s rivers should be taken seriously.

“Meanwhile, accomplishing the railroad project of the region is highly significant,” he said.

The Iranian senior lawmaker also called for launching other construction projects in various fields in Gilan province including turning rubbish into electricity and said the private sector as well as Iranian and foreign investors can play a key role in the accomplishment of the projects.

Larijani also referred to the US and its regional allies’ support for terrorism and added the enemies have been seeking to inflict a blow on the Islamic Republic of Iran over the past decades.

“The mentioned countries’ efforts to embroil us into dangerous situations have backfired,” he said.

“The US officials thought they can throw a wrench in our programs, but all to no avail. We can overcome and foil their plots by accurate planning.”

“We should show the US officials that such moves will cost them much. Today, we, the lawmakers, are working on a plan to give a crushing response to the US inappropriate behaviour towards the Islamic Republic,” he added.