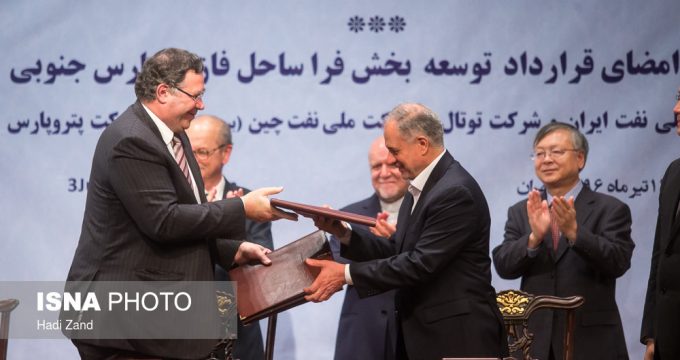 Tasnim – Some Iranian experts and top figures in oil and gas industry have voiced their strong opposition to a $5 billion gas deal recently signed between Iran and France’s energy giant Total, saying Total has hatched “a sinister plot” against the Islamic Republic.

In a television program aired on Saturday night, Asghar Ebrahimi-Asl, a former deputy oil minister, questioned the reasons behind the major deal between Iran and the Total to develop the South Pars gas field and said the French company has come to the country to carry out a “special mission”.

Total’s mission is to help Qatar maximize its gas production from the South Pars, which is shared by Iran and the Arab country, he stated.

He slammed the current Iranian administration’s decision to sign the gas deal and said Iranian companies are capable of doing whatever Total is going to do in the gas field.

Ebrahimi-Asl further said immediately after signing the contract with Total, the Qataris announced that they would increase gas production from the shared gas field by 30 percent.

“The most dangerous problem with this agreement is that we would give the (gas) field’s data to Total and it would draw a plan to maximize the production of the Qatari side and minimize our production,” the former oil ministry official said.

During the program, Massoud Derakhshan, a senior economist and expert in the oil industry, also slammed the gas agreement with Total and said the company’s records indicate that it has made many technical errors, adding that it is also “a bribe-taker and morally corrupt”.

The agreement was signed on July 3 at a ceremony in Tehran attended by Iranian Oil Minister Bijan Namdar Zangeneh, Total’s CEO Patrick Pouyanne and senior officials from China’s CNPC and Iran’s Petropars.

The development of Phase 11 of the South Pars project will cost up to $5 billion.

The vast offshore gas field is shared between Iran and Qatar, where Total is also a major player in gas production as well as in oil and refining. Tehran calls the giant field South Pars while Doha calls it the North Field.