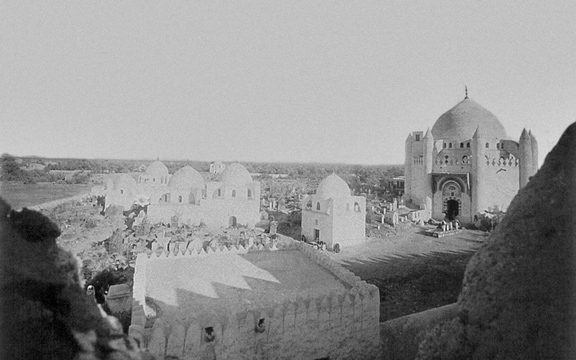 American Herald Tribune | Catherine Shakdam: If Terror has occupied the minds, and much of our debates – the new global threat to be feared, most failed to recognise the insidious battle Wahhabism has waged against humanity as its legions have clawed and hacked at our world religious heritage, targeting the very source of our consciousness.

We are all products of our History, and without those markers, without the pluralism of our collective past experiences we would have no civilization to speak of, no culture to claim, and no spirituality to experience. History is more than the recollection of past events. History is the very fabric of our memory, a canvas upon which communities have been weaved so that they could affirm themselves.

Who are we to deny that which made us, and allowed for who we are? History I would argue is a right than cannot be forfeited, and should never be redacted. And yet, redaction is exactly what we are facing today.

As we quarrel over religiosity, and this imperious need neo-democrats have had to promote separation of power as the only foundation of a viable democracy, how many of us noticed the shrinking of our History to the blade of Terror?

The world religious heritage cannot be measured in political or financial terms. Our past is inherently valuable for it stands a keeper of our global consciousness. Our world religious heritage is together a proof and a testament to our pluralism – which pluralism we should not so callously ignore if we hope to defeat the Terror preached by Wahhabism’s exclusionist complex.

Radicalism it needs to be said, stands an enemy to all faiths, cultures and manners of thinking. Radicalism knows no border, radicalism only knows destruction, violence, and blind intolerance.

Radicalism did not stop at one particular community, its wrath has not limited itself to the obliteration of Islam’s monuments and traditions. Its legions have long vowed to forever disappear all which does not testify to its absolutism.

It is to denounce that radicalism and that absolutism that once again the Baqee Organization took to the streets of Washington DC this July 3rd – intent on denouncing the one act of violence that unravelled all acts of violence: the destruction of the Baqee cemetery in Medina.

One of the holiest city of Islam, Medina is also the resting place of many great personalities of Islam – among which Imam Hassan ibn Ali,grandson of the Prophet  and Fatimah bint Muhammad, daughter of the Prophet. Long held as sacred religious sacred – a place where pilgrims used to congregate to pay their respect to the progeny of the Prophet Muhammad and thus complete their duties towards Islam’s teachings, the Baqee cemetery was laid waste to never to be rebuilt.

A bleeding scar onto Islam, this one crime has gone unanswered for over two centuries on account the Islamic world has lived under the thumb of an ideology which basis is that of hatred and diseased self-righteousness.

Since Wahhabism first rose its head in the desert of Nejd (in Saudi Arabia) in the 18th century, Islam, Christianity, Judaism and all other religious denominations have suffered a veritable cultural genocide.

Over 7000 Islamic sites have been destroyed to assuage Wahhabis’ own sense of self-righteous bigotry – still the world has sat in silence. Firmly anchored in intolerance for they think their ideology holy, and pure, Wahhabi clerics have rationalised religious oppression and brutality, turning it into a well-honed system.

The Islamic Heritage Research Foundation in London estimates that over 98% of Saudi Arabia’s historical and religious sites have been destroyed since 1985.

“It’s as if they wanted to wipe out history,” says Ali Al-Ahmed, of the Institute for Gulf Affairs in Washington, DC.  In recent past, the terrorists following the same Wahhabi teachings have destroyed various places of worship of both Muslims and non-Muslims.

These include the shrines of Prophet Jonah in Nineveh, Prophet Daniel, Prophet Idris and Prophet Seth in Mosul.  The same Wahhabi ideology has evolved into terrorist organizations such as ISIS, Boko Haram, Taliban, Al Qaeda, Al Shabaab and several others around the world.

But as it lies in ruins, the Baqee cemetery came to represent Resistance – the call of a people against the injustice of radicalism, the need for a people to reclaim its History so that cultural and religious identity would not be lost.

“Our duty is not only to the reconstruction of the Baqee Cemetery, in that its ground is holiest of all to Islam, but the preservation as a whole of all our religious historical heritage. The right to religious freedom does not stop at the practice of one’s faith, but all that made a faith: its history, its culture, its traditions, its monuments, its art. Losing our past to sledgehammers and exclusionism would be a tragedy too far! We will not stand for it,” said the Baqee Organization.

If we are serious about counter-terrorism we will need to acknowledge that there are many dimensions to such fight. Our History is being targeted so that another, one to the image of tyrants could be manifested instead, and our heritage forever lost.