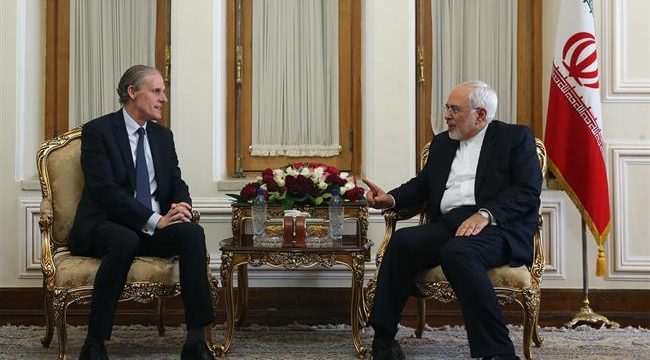 Tehran hails any political solution to Syrian crisis by Paris

MNA – Iran’s FM Zarif said Iran would welcome any initiative taken by the French government to find a solution to the current conflict in Syria.

Christian Masset, Secretary-General of the French Ministry of Foreign Affairs and International Development, met and talked with Iran’s Minister of Foreign Affairs Mohammad Javad Zarif in Tehran on Monday exchanging views on issues of bilateral relations.

At the joint session, Iran’s Zarif said relations between the two sides were on the right track expressing hope that joint collaborations Iran and France will grow and continue.

“Bilateral meetings will remove barriers to ties between the two countries,” highlighted the Iranian FM calling for progression of political dialogues.

Touching upon regional developments, the official voiced readiness of the Islamic Republic of Iran to offer humanitarian aids to the Syrian people adding that Tehran will embrace any initiative of the French government to find a political solution to ongoing crises in the Arab country.

France’s Masset, for his part, referred to deep relations between the two sides stating “volume of economic transactions between Iran and France soared significantly following implementation of the Joint Comprehensive Plan of Action (JCPOA).”

Paris is seeking to eliminate obstacles to bilateral ties between the two parties as well as to create an appropriate mechanism for continuation of joint cooperation,” he underlined.

The official stressed his country’s firm position towards complete implementation of the JCPOA and expressed France’s willingness to resolve recent crises in the Persian Gulf.

Christian Masset went on to emphasized that France receives mediation of countries to resolve the crisis with warm arms.