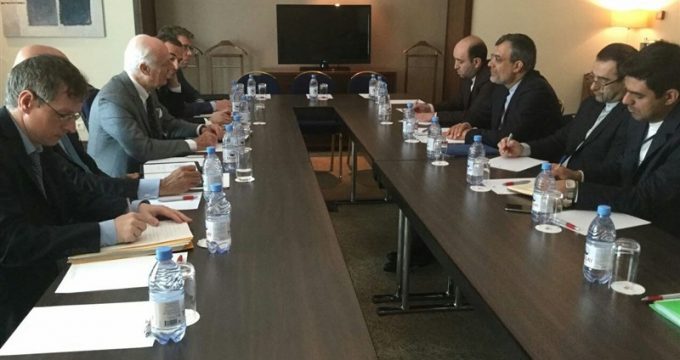 FNA- Iranian Deputy Foreign Minister for Arab and African Affairs Hossein Jaberi Ansari underlined the necessity for the UN to play a more active role and help enforce the agreement on de-escalation zones in Syria.

Jaberi Ansari made the remarks in a meeting with UN special Envoy for Syria Staffan de Mistura in Astana on Tuesday.

He stressed that the world body should also help the Syrian-Syrian talks with the aim of starting the national reconciliation process.

De Mistura, for his part, emphasized the UN’s support for efforts by Iran, Russia and Turkey within the framework of the Astana talks on Syria, and called for Tehran’s role in assisting the UN-brokered Syria peace talks in Geneva.

De Mistura announced late June that there are serious efforts for applying the agreement on de-escalation zones in Syria which will be followed up on during the upcoming Astana meeting.

He said that as UN-sponsored political efforts are being exerted, the three guarantor states are working to establish mechanisms for applying the memorandum on de-escalation zones reached during the previous Astana meeting.

The Envoy added that he plans to attend the next Astana meeting due to be held on July 4-5.

He also stressed that a number of technical steps have been taken prior to the next round of intra-Syrian talks in Geneva scheduled for July 10-14, noting that the previous round launched a technical consultation process that should set the stage for official meetings, noting that the Syrian government was the first to commit to this process.

De Mistura underlined that the intra-Syrian talks in Geneva will discuss the baskets as per its agenda, hoping to reach direct talks between the Syrian government and a “unified opposition,” and called for working to hold another round of talks in late August or early September