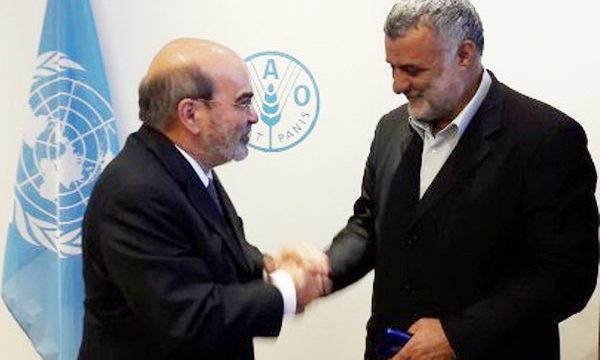 FAO Director-General, José Graziano da Silva, met with Mahmoud Hojjati, Iranian Minister of Agriculture who is in Rome to attend the organization’s 40th Conference from 3-8 July.

At the meeting, Graziano da Silva stressed FAO’s determination to further develop cooperation with the Islamic Republic of Iran.

He pointed to his organization’s partnership in collaborative restoration program of Lake Urmia and expressed hope that positive outcomes will be received.

FAO director-general also urged Iran to assist regional countries in various technical and research fields of agriculture, in particular in the fight against diseases and pests of palm dates.

Also at the meeting, Iran’s Hojjati pointed to the 600% rise in number and volume of credits of joint projects between Iran and FAO in the last four years saying “Iran has made outstanding achievements in the agriculture sector as ratio of self-sufficiency has risen while trade deficit of the sector fell from minus $8 million in 2013 to minus $3 million in 2016.

Iran’s agriculture minister also recalled that 19 joint projects are being implemented with FAO in various sectors including fisheries, oilseeds, forest, technology as well as veterinary.

The 40th Session of the FAO Conference will be held on 3-8 July, 2017. The Conference is the organization’s highest governing body and sessions are held every two years.

The purpose of the Conference is to convene the Member Nations at FAO headquarters to review and vote on the Director General’s proposed program of work and budget. Conference is also an important opportunity for dialogue on food and agriculture issues.