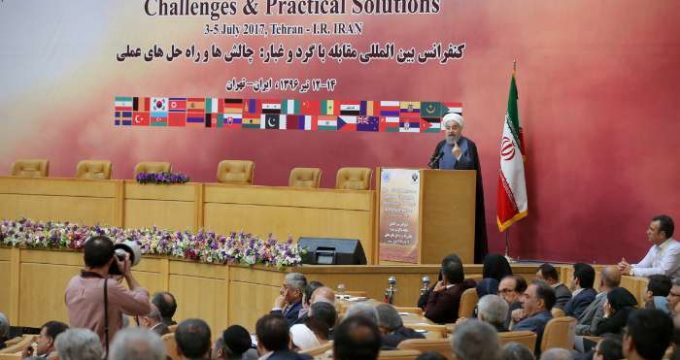 MNA – Iran’s President Rouhani said planning, investment as well as regional and international cooperation were prerequisites to the fight against sand and dust storms.

President Hassan Rouhani made the remarks while addressing the International Conference on Combating Sand and Dust Storms which kicked off Monday morning at Tehran’s Islamic Summit Conference Hall.

He welcomed representatives of the United Nations and various countries participating at the event expressing hope that the conference will offer constructive solutions to environmental issues like dust and sand storms.

Highlighting the significance of environmental issues, the official said combatting dust and sand storms required careful planning, investment and collaborations at regional and international levels; “environment also remains a top priority for the Iranian government who has the honor of saving Lake Urmia as an environmental model to the region and the world which prevented several catastrophes.”

On roots of dust storms in the country, the Iranian President said some roots can be traced domestically while the main causes belong to foreign sources which account for 80 per cent of the problem.

“Dust and sand storms have their roots in Iraq, Syria, Kuwait, Saudi Arabia, Pakistan, Afghanistan and Turkmenistan,” he underlined.

Rouhani further touched upon adverse effects of the natural phenomenon on human life and agricultural activities saying “the issue has been exacerbated significantly in recent years.”

Today, several regions in the world are suffering from sand storms mainly due to construction of dams without conducting necessary studies. Environmental issues cannot be easily ignored or neglected since wrong decisions can bring about destructive outcomes in more than one country. People will be forced to immigrate and civilizations are likely to disappear hence the need for taking up the humanitarian and international responsibility of combatting the environmental disaster.

He called for unity and avoidance of division among regional countries as the only way out of environmental calamities; “we need to seek a more powerful region by avoiding destructive competitions since ongoing wars have affected both political and environmental sectors.

Hassan Rouhani invited regional states to act like members of one family who remain beside each other asserting “if ISIL and other terrorist groups continue killing of innocent people, agricultural activities will end consequently turning the region into deserts. Terrorism will cause trouble for all parties including its supporters.”

“The era of building walls between countries has ended and countries need to join hands and respect rights of others,” noted the Iranian President adding “the US and Saudi Arabia are on the wrong track if they think otherwise.

He called for adoption of win-win policy in environmental issues; “the Islamic Republic has taken positive steps in preventing expansion of deserts.”

Joint plans need to be adopted and countries need to boost cooperation in collaboration with the United Nations in order to reach favorable results in the field of environmental issues, he concluded.