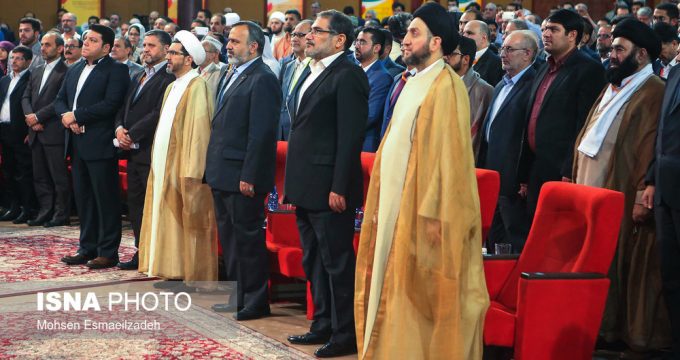 Tasnim – Secretary of Iran’s Supreme National Security Council Ali Shamkhani called on conscientious media outlets to counter attempts at diminishing the significance of Palestine and turning it into a minor issue in the Muslim world.

In an address to an annual meeting of the Islamic Radios and Televisions Union, held in Iran’s northeastern city of Mashhad on Sunday, Shamkhani warned of plots to consign the issue of Palestine to oblivion.

He explained that such schemes have been sought by certain governments through both diplomacy and the “Takfiri current that has been founded in some countries by the terrorism-generating factory.”

Certain regimes spend as much as $400 billion to hide the fact that Israel is the Muslim world’s main enemy, and even boycott a Sunni state in the name of defense of Sunnis and ask it to cut ties with Hamas, Shamkhani deplored, without directly naming Saudi Arabia, which has severed ties with Qatar.

He then called on conscientious media organizations to thwart the plot to make Palestine a secondary issue, stressing that in addition to taking advantage of audio, video and social media, Muslims can perfectly counter those hostile schemes in religious congregations such as Hajj and Arbaeen.

The top official also described Iran’s advisory help for Iraq and Syria in the fight against terrorism as part of the “chain of resistance” that defends Palestine.

Leader of the Islamic Revolution Ayatollah Seyed Ali Khamenei has also warned multiple times against attempts by the arrogant powers to undermine the Islamic world and sap the strength of Muslims to easily consign the issue of Palestine to oblivion.

“They (hostile powers) are aware that if Muslims have strength and their voice is loud and clear, they will not be able to oppress (Muslim) nations and the issue of Palestine, the usurpation of an Islamic country, will not fade into oblivion,” the Leader said in May 2016.