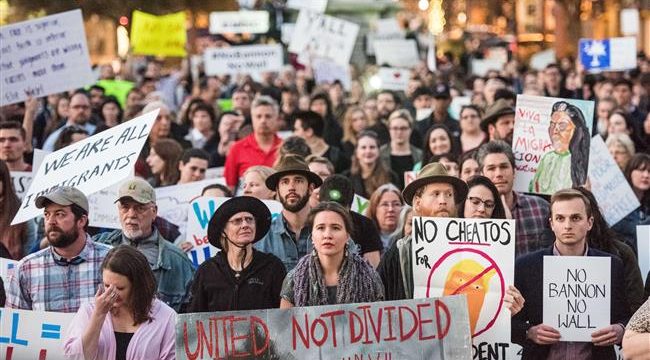 Press TV – The US travel ban on six Muslim-majority countries came into effect on June 30 after the Supreme Court allowed the Trump administration to go forward with a revised version of the order. The ban denies entry to citizens of Iran, Libya, Somalia, Sudan, Syria and Yemen, who lack “bona fide relations” to individuals or entities in the United States.

To discuss the issue, Press TV interviewed Anthony James Hall, a professor and editor-in-chief of the American Herald Tribune from Tehran, and Michael Lane, president of the American Institute for Foreign Policy from Washington.

Hall said President Donald Trump is trying to portray Muslims as a security threat in order to justify his xenophobic policy.

“Donald Trump is playing on Xenophobia,” for his political goals, the commentator said on Saturday.

Trump’s move to bar Muslims from entering the United States “encourages people to be their worst, it tries to bring out hatred to people and of course the Republican Party in particular has played on Islamophobia,” he noted.

“The Islamophobia, the hatred of Muslims, has been sold as a kind of political platform and this is truly reprehensible in terms of depriving humanity of a decent mental environment,” the professor said.

He added that “we (Americans) are polluting the mental environment with this idea that certain people are more prone to violence.”

He also pointed to the role of media in promoting hatred against the Muslim community, saying, “Americans have been geared up to feel afraid of Muslims and that has been a major priority of big media conglomerates.”

According to Hall, the US like Israel is trying to make the world feel very unsafe by demonizing the Muslim people and propagating that there are “good Muslims and bad Muslims.”

He went on to say that the implementation of the travel ban on Muslims will not make the world a safer place.

“The world does not feel safe,” because the US is the most heavily and maliciously armed country, which has pursued state-run terrorism throughout the world, he warned.

Trump is promoting double standard when it comes to global security by targeting Muslims and yet providing huge arms deals to Saudi Arabia, which is a kind of “proxy army” to wreak havoc in the Muslim world by promoting the ideology of Wahhabism, Hall criticized.

Lane, the other guest in the show, said the Trump administration would argue the travel ban on Muslims would make America safer in the short and long run.

The analyst argued that there are historic problems between the United States and those countries on the list of the travel ban; so, the US needs to conduct “thorough vetting” to know who is coming into the country.

He argued that the US government and the Saudi kingdom cooperate to conduct vetting procedure to identify people who are not welcome to America.

However, Lane concluded that the travel ban has nothing to do with religious affiliations, but it targets just a few countries not the whole Muslim world.