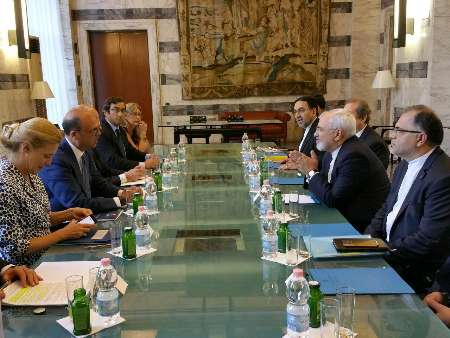 IRNA – Foreign Minister Mohammad Javad Zarif who is on an official visit to Rome conferred with his Italian counterpart Angelino Alfano late Wednesday.

During the meeting, Italian foreign minister condemned the recent terrorist attacks in Tehran, stressing the need for combating terrorism and extremism.

Describing Tehran nuclear deal known as Joint Comprehensive Plan of Action (JCPOA) as a contributor to regional and international stability, he voiced his country’s support for the international pact, recalling International Atomic Energy Agency’s (IAEA) verification of Iran’s compliance with commitment under the accord.

Zarif, for his part, referred to excellent relations between the two countries, contending that exchange of economic and banking delegations will help further strengthen bilateral relations.

Pointing to regional developments, he further noted that Italy can use its capacities to reduce tension among regional states.

Zarif also said that any attack on Syria by the US under empty pretexts will help reinforce Daesh (the ISIS terrorist group) in the region.