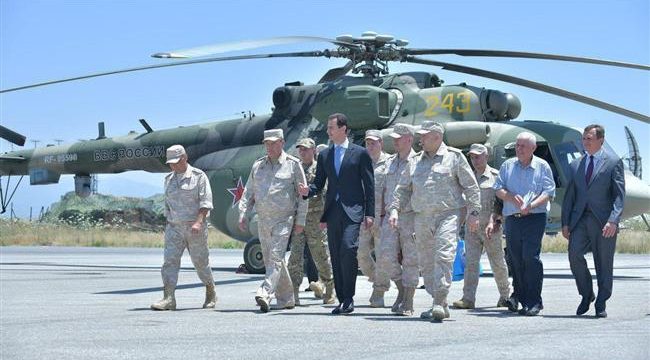 Press TV – Syrian President Bashar al-Assad has paid a visit to a Russian-run air base in the country’s western coastal province of Latakia, from which Russian fighter jets conduct airstrikes against Daesh terrorists and foreign-sponsored Takfiri militants.

The Syrian leader inspected a single-seat, twin-engine and super-maneuverable Sukhoi SU-35 fighter jet as well as armored vehicles at Hmeimim base southeast of the provincial capital city of Latakia on Tuesday, and met with a number of Russian military commanders there, Syria’s official news agency SANA reported.

“The Syrian people will not forget the support of their Russian brothers,” Assad wrote in the base visitors’ book, AFP reported.

Russian Defense Ministry issues a statement noting that during the visit, Assad and Gerasimov had held talks at the base on “coordination between Syrian government forces and Russia’s air force”.

Hmeimim serves as Russia’s permanent air base inside Syria and is adjacent to the Bassel al-Assad International Airport, with which it shares some airfield facilities.

Earlier this year, Damascus and Moscow signed a treaty to lease the base to Russian military forces for 49 years, extendable for an additional 25 years.

Russia also plans to upgrade its naval base in Tartus, the second largest port city in Syria, where Moscow has been keeping a support and maintenance facility for its naval forces since 1977.

Military sources said expansion of the naval base, located some 86 kilometers south of Hmeimim, would enable bigger vessels to call at the military site. Moscow is reportedly considering deployment of S-300 surface-to-air missile defense systems and Bastion coastal missile launchers there.

Moscow launched its campaign against the Daesh Takfiri terrorists and other militant groups in Syria upon a request from Damascus in September 2015. Its airstrikes have helped Syrian forces carry out effective counterterrorism operations against foreign-backed militants operating in the country since 2011.