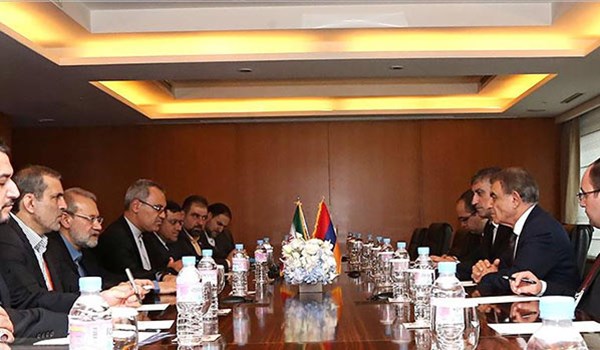 “Iran and Armenia have long-standing relations and Iran is ready for cooperation in different fields,” Larijani said in a meeting with his Armenian counterpart Ara Babloya on the sidelines of meeting of Eurasian parliament speakers in Seoul on Tuesday.

The Iranian parliament speaker reiterated that accelerating implementation of memoranda of understanding on setting up power plants and electricity transmission signed earlier can benefit both sides.

He pointed to the two countries’ long-standing relations, and said, “Cleaning Aras River will make us happy.”

Babloya said that Iran-Armenia Parliamentary Friendship Group will be enacted in the Armenian parliament soon in line with promoting parliamentary ties between the two legislations.

“I am confident that during your tenure in office, the friendly neighborly Iran will continue to develop upward, bringing its considerable and important contribution to the regional peace and stability,” President Sargysyan said.

“I am hopeful that through our joint efforts, the traditionally warm and friendly Armenian-Iranian relations will continue to develop and strengthen in all areas, registering a qualitatively new level of cooperation between our peoples,” he added.

In late February, Tehran and Yerevan signed an agreement to boost their cooperation in the field of customs affairs.

According to the agreement, the two countries will promote cooperation on custom regulations, products’ value and classification, enforcing rules and transportation rules.

Upon implementation of all provisions of the newly-signed protocol, all information, requests as well as customs and trade documents between Iran and Armenia need to be provided in accordance with national laws of both sides.

As per the agreement, every three months as well as on an annual basis, the two parties will exchange customs statistics data on bilateral trade turnover.

The cooperation pact will provide the necessary grounds for facilitating and expanding trade between Tehran and Yerevan as will also open a new chapter in trade relations, which will in turn, elevate bilateral economic ties between the two countries.

Export by Iran to Armenia amounted to $179.103 million in the previous Iranian calendar year (ended March 21) and Iran’s imports from Armenia during the same period stood at $20.892 million.