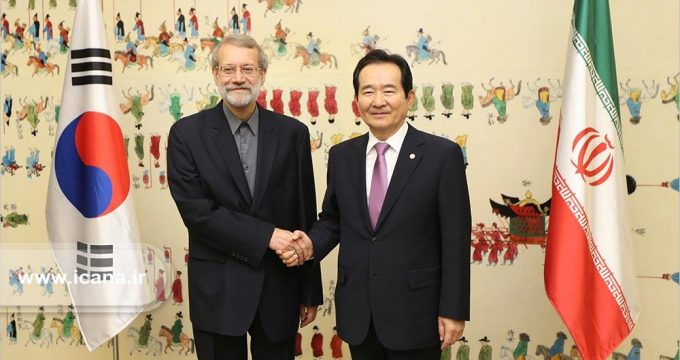 “Facilitation of banking ties, issuing visa and launching direct flights between Seoul and Tehran is an important step to consolidate relations between Iran and South Korea,” Larijani said during the meeting on Wednesday.

He also stressed Tehran’s preparedness to attract investment by South Korea and using the country’s experiences in different energy, environmental and railway projects.

Chung, for his part, described the two countries’ ties as developing, emphasizing his country’s readiness to cooperate with Iran in energy, oil, gas, petrochemical and clean energy fields as well as car manufacturing.

He also underscored the need for facilitated banking ties between the two countries.

“We are planning to pave the way for the presence of Iranian banks in Seoul,” Tayyebnia said upon arrival in Seoul.

Tayyebnia has travelled to South Korea to take part at the 2nd Annual Meeting of the Board of Governors of the Asian Infrastructure Investment Bank (AIIB) held in the city of Jeju from June 16-18, 2017.

On the sidelines of 2017 AIIB Jeji, the Iranian minister met with South Korea’s Dong-yeon and the two sides exchanged views of economic issues like creating credit lines between the two sides and opening branches of Iranian financial institutions in South Korea.

Talks with South Korean banks over creation of LOCs are being finalized though agreements need to be reached by ministers of the two countries in order to resolve certain issues.

Moreover, measures already taken to provide broker relations or to open branches of Iranian banks in the East Asian state need to be pursued more seriously by banks of both sides.

The main axes of talk between the Iranian and South Korean finance ministers included creation of Lines of Credit (LOCs) between banks of Iran and South Korea, launching brokerage ties as well as opening branches of Iranian banks in the East Asian country.