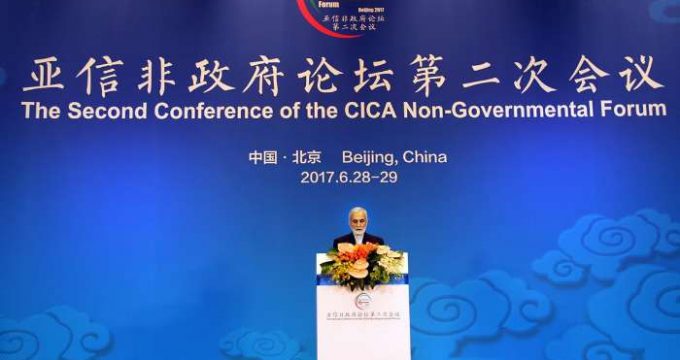 IRNA – The second non-governmental forum of the Conference on Interaction and Confidence-Building Measures in Asia (CICA) was opened today in China’s capital.

Some 200 representatives of the member states, including Head of Iran’s Strategic Council on Foreign Relations Kamal Kharazi and the Islamic Republic News Agency (IRNA) managing director Mohammad Khoddadi are participating in the two-day conference.

Asia’s security and development is the main topic of the conference and participants will discuss on the ways of development, security status, sustainable development, confidence-building, and ways of establishing comprehensive sustainable security in Asia.

Chinese New Silk Road, the United Nations Millennium Development plan, fighting terrorism, confronting cyber attacks, the role of media in CICA and in the world, and climate change are among the major topics of the forum.

The Chinese People’s Association of Ministry of Foreign Affairs, Beijing Municipality and the Association of Public Diplomacy of China are hosting the gathering.

Stressing on the expansion of cooperation among countries and establishing peace all over the world, the Secretary of the Conference Yuan Chen in the opening ceremony of the second annual forum said that achieving these goals are not merely the mission of the governments and their organizations, rather the non-governmental entities should feel responsible and play a more active role to realize them.

The Iranian representatives will hold meetings with some participating officials on the sidelines of the conference and discuss mutual interests.

The first annual forum of CICA was held in 2015 in Beijing.

The Chinese city also hosted the fifth meetings of the Foreign Ministers of the CICA member-states, including Iran, in April 2016.

CICA, having 24 members, 13 observers, convenes from 1992. The member countries cover nearly 90 percent of Asia and 72 percent of the region known as Eurasia.

Islamic Republic of Iran is a permanent member.