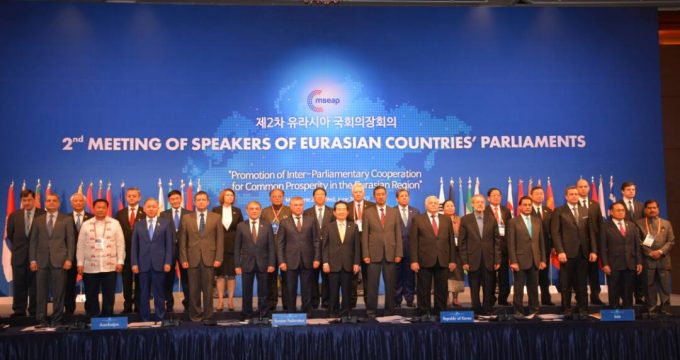 Tasnim– Iranian Parliament Speaker Ali Larijani slammed a new set of sanctions approved by the US Senate against Tehran as a violation of international laws and norms and against the Charter of the United Nations.

“The US Senate’s move to impose unilateral sanctions against Iran is a flagrant violation of international laws, the charter of United Nations and the multilateral trading system,” Larijani said while addressing the second annual meeting of parliament speakers of the Eurasian states underway in Seoul.

The US Senate on June 15 overwhelmingly passed a bill imposing sanctions on Iran over its missile program among other things. The legislation still must pass the Republican-led House of Representatives and be signed by President Donald Trump to become law.

However, House members found that the legislation violated a constitutional requirement that any bill that raises revenue for the government must originate in the House, something known as a “blue slip” violation.

The senior Iranian official said such measures are against US commitments under international law on non-interference in domestic and international affairs of other countries.

He also underlined the need for taking retaliatory measures by all countries’ governments and parliaments to foil the bans and prevent such “arbitrary and coercive behavior.”

Elsewhere in his remarks, Larijani said the US is playing with terrorism instead of fighting the scourge, calling for increased pressure against the promoters and sponsors of terrorist ideology.

The Iranian parliament speaker arrived in South Korea on Monday.

Co-hosted by South Korea’s National Assembly and the State Duma, the lower house of Russia’s legislature, the three-day meeting is expected to conclude with a joint declaration on closer cooperation for prosperity in the Eurasian region.