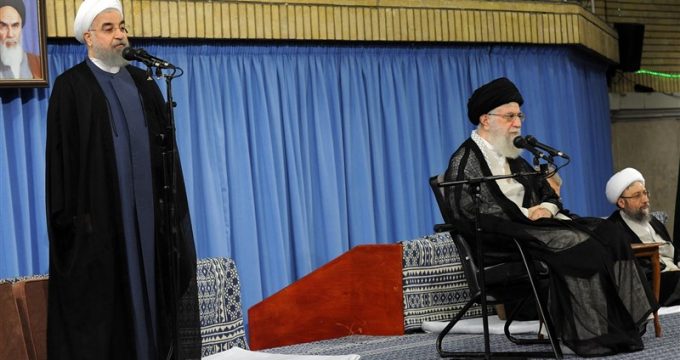 Tasnim – Iranian President Hassan Rouhani appreciated the efforts by those involved in developing and employing strategic weapons for protecting the country.

“I’d like to thank the ones that manufacture strategic arms for the country and the ones that employ such strategic weapons very well,” President Rouhani said in a meeting of top Iranian officials and ambassadors of Islamic nations with Leader of the Islamic Revolution Ayatollah Seyed Ali Khamenei, held in Tehran on Monday on the occasion of Eid al-Fitr, which marks the end of the holy month of Ramadan.

His comments came after the Islamic Revolution Guards Corps (IRGC) on June 18 fired six homegrown ballistic missiles with pinpoint accuracy from Iran’s western provinces of Kermanshah and Kurdistan at the positions of Daesh (ISIL) terrorists in Syria’s Deir ez-Zor. The raid was made in retaliation for a recent terrorist attack in Tehran claimed by Daesh.

Elsewhere in his comments, the president denounced the June 7 terrorist attacks in Tehran as a cowardly assault on defenseless people, stressing that the incident could by no means undermine the national unity and rapport in Iran.

Iran’s response to the terrorists came with the revelation of just a tiny part of the country’s defense capabilities, Rouhani added.

He further expressed the hope that Islamic countries would take advantage of the spiritual achievements of the holy month of Ramadan to bolster unity, and wished for restoration of security and peace to regional nations, such as Yemen, Bahrain, Syria, and Iraq.

In a congratulatory message to world Muslims on Eid al-Fitr on Sunday, President Rouhani had described the festive occasion as a manifestation of Muslim unity for defusing discord and countering violence, extremism and poverty across the Islamic world.