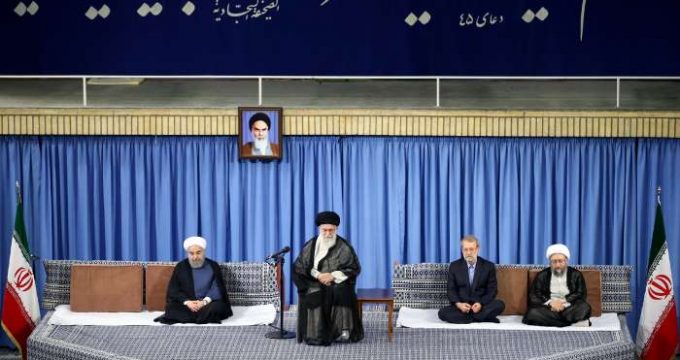 Press TV – Leader of the Islamic Revolution Ayatollah Seyyed Ali Khamenei says Muslims today are obliged to fight Israel with whatever means they have as he calls Palestine the foremost issue of the Islamic world.

“According to Islamic jurisprudence, when an enemy takes over Muslim lands, Jihad in any possible form becomes everyone’s duty,” the Leader told Muslim ambassadors, Iranian officials and ordinary people in Tehran Monday during a meeting on the occasion of Eid al-Fitr.

“Today the fight against the Zionist regime is obligatory and necessary for Muslims. Why do some evade this duty?” Ayatollah Khamenei added.

The Leader touched on the ongoing conflicts in Yemen, Syria, Iraq and North Africa, warning of the “great danger of consigning the Palestinian issue to oblivion.”

“Palestine is the number one issue of the Islamic world, but some Islamic countries are acting in such a way as to have the Palestinian case ignored and forgotten.”

Ayatollah Khamenei described disunity as “the most important problem and a great wound on the body of the Islamic world” in the face of the enemies’ efforts to fan the flames of sectarian, religious and territorial strife.

“Division and discord are harmful to Islam and the Islamic Ummah. On the other hand, proximity among Islamic countries and avoiding the use of force against one another is in accordance with divine wisdom and in the interest of all Islamic countries.”

The Leader touched on remarks this month by a US lawmaker appearing to support a terror attack in Tehran by Daesh and implying that it was President Donald Trump’s strategy.

“Isn’t it a good thing for us to have uh, the United States finally backing up Sunnis who will attack Hezbollah and the Shia threat to us? Isn’t that a good thing?” Republican Rep. Dana Rohrabacher said during a House Foreign Affairs Committee hearing.

Ayatollah Khamenei said, “A US congressman defending a Sunni community against Shias, while they are hostile to the essence of Islam and Muslims, is a vicious conspiracy.”

“And this matter calls for awareness and concern, but unfortunately, the authorities of the Islamic states are neglecting these hostilities,” he added.

The Leader further hailed Quds Day rallies on Friday and the massive public turnout in Tehran and other cities across Iran to defend the Palestinian people as “a proud example of Islamic unity.”

“The meaning of the Islamic unity is that the Shia and fasting people come to the streets with such magnificence and express empathy and sympathy with Palestinians who are Sunni.”