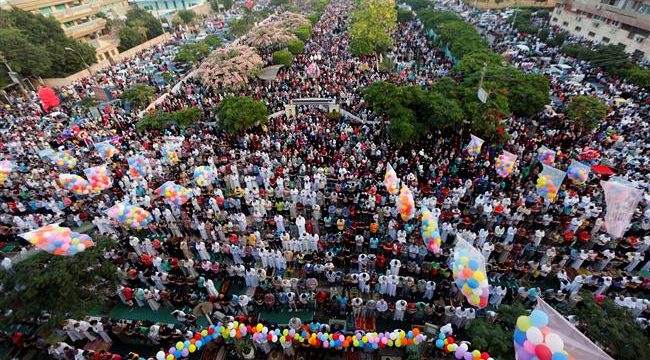 Press TV – Muslims in a number of countries are celebrating  Eid al-Fitr, which marks the end of the holy fasting month of Ramadan.

Iraq’s Sunni population also observed the festival on Sunday. The occasion will be marked in Iran, Oman, Morocco and other countries on Monday.

The fasting month of Ramadan — the ninth month on the Islamic calendar — ends with the celebration of Eid al-Fitr, which is one of the main Muslim holidays.

Ramadan’s end is announced after the sighting of the first crescent of the new moon.

Syrian President Bashar al-Assad performed the Eid al-Fitr prayers along other worshipers at al-Nouri Mosque in the west-central city of Hama on Sunday.

Syria’s official SANA news agency quoted Sheikh Ali as saying that Assad’s presence in Hama for the prayers showed that the Syrians were “a few steps” away from victory and the return of security to their country.

The crisis in Syria, which began in 2011, was meant to tear down the Syrians, but it rather “strengthened the ties among the Syrians,” he added.