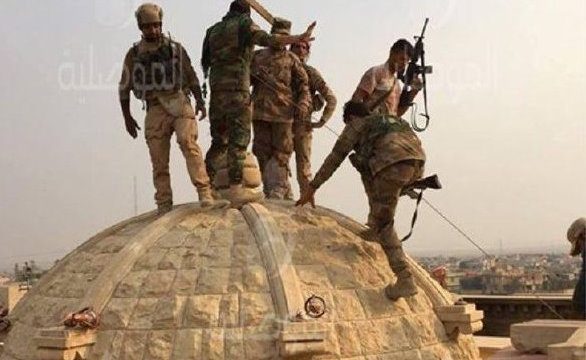 “The Popular Mobilization Units are vital part of Iraq’s official defense system, which has been backed by the Iraq parliament,” Lieutenant General Raed Shaker Jawdat told Press TV on Friday.

He also stressed that the Iraqis were “very proud” of the PMU as they “have led the most impressive epic and heroic battles.”

Since the beginning of the counter-terrorism operation in Iraq, the PMU have provided significant and essential support for rebuilding security apparatuses in the Arab country, he said, noting that Iraq is now secure thanks to Hashd al-Sha’abi.

The commander further hailed recent operations along the Iraq-Syria border as a great achievement and a strategic move to prevent terrorist organizations from boosting their presence in the country.

Hashd al-Sha’abi was formed after the rise of Daesh in Iraq in 2014. In the early days of Daesh’s terror campaign, the volunteer fighters played a major role in reinforcing the Iraqi army, which had suffered heavy setbacks in the face of lightening advances of the Takfiri militants.

Currently, they are actively cooperating with the Iraqi military and allied groups in a large-scale operation to fully liberate the northern city of Mosul, , the de facto capital of the Daesh terrorist group in the Middle Eastern state.

On November 26, 2016, the Iraqi parliament recognized Hashd al-Shaabi as an official force with similar rights as those of the regular army.

Elsewhere in his remarks, Iraq’s federal police chief voiced concerns over terrorists’ use of civilians as human shields.

The militants force women and children to cover them in the streets as they know that Iraqi security forces will not target civilians, he said.

Jawdat also stressed that when the terrorists lose a region they used human shields to secure their way out of the area.

Separately on Friday, at least three people lost their lives as bombers attacked the Muthanna neighborhood, a shopping district east the city of Mosul.

The first bomber set off his explosives when he was stopped by police, the second bomber managed blew himself up among civilians, and the third bomber was killed by police before he could detonate his explosive vest, according to medical and security officials sources.

The Iraqi army soldiers and allied volunteer fighters have been leading a major operation to recapture the city since October 2016. They took control of eastern Mosul in January and launched the battle in the west in February.

The Mosul liberation operation has taken longer than planned as Takfiri elements are using bombings, sniper fire, and mortar attacks to slow the advance of the Iraqi forces.